HALOT vs. DCH: Battle of the Hebrew Lexicons—Match 1 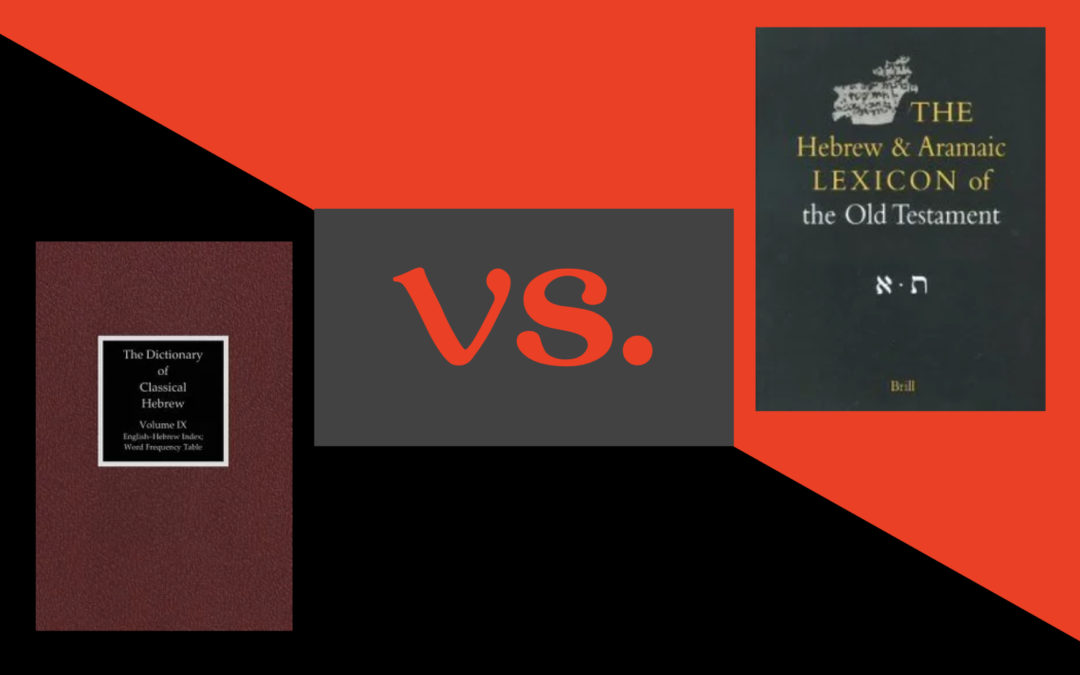 Welcome to the series where I pit biblical language lexicon against biblical language lexicon. Accordance Bible Software has kindly sponsored three matches between HALOT and DCH. These acronyms are for the Hebrew and Aramaic Lexicon of the Old Testament (HALOT) and the Dictionary of Classical Hebrew (DCH). And they’re the heavyweight competitors in the relatively-recently-published Hebrew lexicon category.

Here’s how it goes down. Each match will consist of three rounds following the same format as BDB vs. HALOT: Battle of the Hebrew Lexicons and BDAG vs. Thayer: Battle of the Greek Lexicons. In this first installment, we’ll consider three words from a prophetic book. We’ll dip back into the book of Haggai one more time since I’m still teaching a series on this short gem from God’s Word. Next time, we’ll look at a text from the Pentateuch and conclude with a look at a historic book. For each round, I’ll provide the Hebrew lemma, the verse where it’s from, a screenshot comparison of lexicon entries, breakdown, and analysis. Let’s begin.

All screenshots in this post are from Accordance Bible Software.

HALOT: HALOT gives us the plural form. We also find transliterations of potentially related terms from Ugaritic, Syriac, and Arabic. There are two senses for this word: granaries and heaps, stores of fruit. And. according to the editors, the usage of this word in Hag. 2:16 communicates the first sense and can be glossed as granaries. It’s curious that they glossed a singular Hebrew noun with a plural English noun. And, illustrating the inherent weakness of glosses, we’re left to our own devices to figure out what a granary would have been back in Haggai’s day.

DCH: Unlike HALOT, DCH does not include Semitic cognates. According to the introduction, while these may be a traditional fixture in lexicons, their inclusion is problematic and largely irrelevant. This entry does tell us this is a feminine noun (n.f.) and glosses it as heap. No granaries here; there’s only one sense. We find this word shows up in Hag. 2:16 as a heap “of grain.” It’s then classified as a construct noun (<CSTR>) and with its preposition (<PREP>). At the end of the entry, there’s an arrow directing us to the related verb ערם (I heap up).

Evaluation: I wish HALOT offered some kind of explanation on this granary gloss. I don’t presume to understand the word עֲרֵמָה better than the lexicographers, but the passages they list under granary do seem to fit better when translated as heap. And heap is the only gloss we find in DCH. While DCH doesn’t offer any Semitic cognates, having access to them (even in transliterated form) offers little. Is DCH performing a useful service with its syntactical classification system? I’m not sure. But I’m giving DCH the win for round one because I think they made a better lexical choice, although I’m open to vocal disagreement.

HALOT: After a few Semitic cognates, we see a distinction between the Qal and Niphal verb forms. Our occurrence of this word in Haggai 2:16 appears under the third sense to skim off. This usage occurs in Isa. 30:14 with water and in Hag. 2:16 with wine.

DCH: There are actually two entries for separate words with identical spellings (a homonym). Haggai 2:16 shows up under both as you can see in the screenshot I’ve included below.

But, according to the second entry, this is a new word you won’t find in BDB (as indicated by the asterisk). I wasn’t able to figure this out from the frontmatter of DCH, but there’s an informative paper available on Academia by David J. A. Clines, himself—the man behind DCH. The first entry gives us the glosses to make bare, strip, skim. The second gives us the gloss to scoop up. It’s up to us to figure out which one is the most likely and why.

Evaluation: Personally, I prefer HALOT’s treatment of this word. The case for a homonym isn’t the most convincing. How different is to skim off from to scoop up? Even the editors of DCH appear unwilling to fully commit themselves as evidenced by including Hag. 2:16 under both entries. So I’m giving HALOT the win for giving us an entry we can work through to best determine the meaning of our word.

Hag 2:17  I struck you and all the products of your toil with blight and with mildew and with hail, yet you did not turn to me, declares the LORD.

HALOT: HALOT offers some helpful analysis of the three different Greek words the Septuagint uses to translate this Hebrew word. Then there are two uses of this word. I suppose these are senses, but only the first is glossed—scorching, burning. Relevant to our study, the second usage of “expressions” includes occurrences of this word with the Hiphil verb נכה (to strike).

DCH: The occurrence of this word in Hag. 2:17 appears with the preposition בְּ and Hiphil verb נכה (to strike). It also appears under the category of collective nouns with the word בָּרָד (hail). There’s a list of synonyms, and the related verb שׁדף (to scorch).

Evaluation: These two lexicons give glosses with different meanings. HALOT says scorching, burning. DCH says blight. I’m not sure who’s right, but I appreciate the fuller discussion from HALOT. So I’m giving the win to HALOT.

In addition to comparing entries for these two lexicons, there are some other important factors to be aware of. HALOT also covers the Aramaic words in the OT. The coverage of DCH extends beyond the Old Testament to Ben Sira and the Dead Sea Scrolls. And from a price comparison, DCH costs more than HALOT (at least, if you’re purchasing either lexicon from Accordance). But it’s worth noting there’s a lower-priced abridgment of DCH called the Concise Dictionary of Classical Hebrew (CDCH). Maybe we’ll take a brief look at this in one of the upcoming matches.

The final score for match one is 2-1 HALOT. But this is only the first match. It remains to be seen who will prevail. Overall, HALOT offers fuller lexical coverage along the lines of what Greek students would expect to find in BDAG. DCH offers a more robust syntactical classification. Both lexicons have their shortcomings. Both exclusively employ the gloss; you won’t find definitions in either. From my brief analysis, I feel both have plenty to offer the exegete.

Thanks to Accordance Bible Software for providing me with a free digital copy of DCH. (I recently purchased HALOT on my own!) This did not influence my thoughts regarding the work.