BDB vs. HALOT: Battle of the Hebrew Lexicons 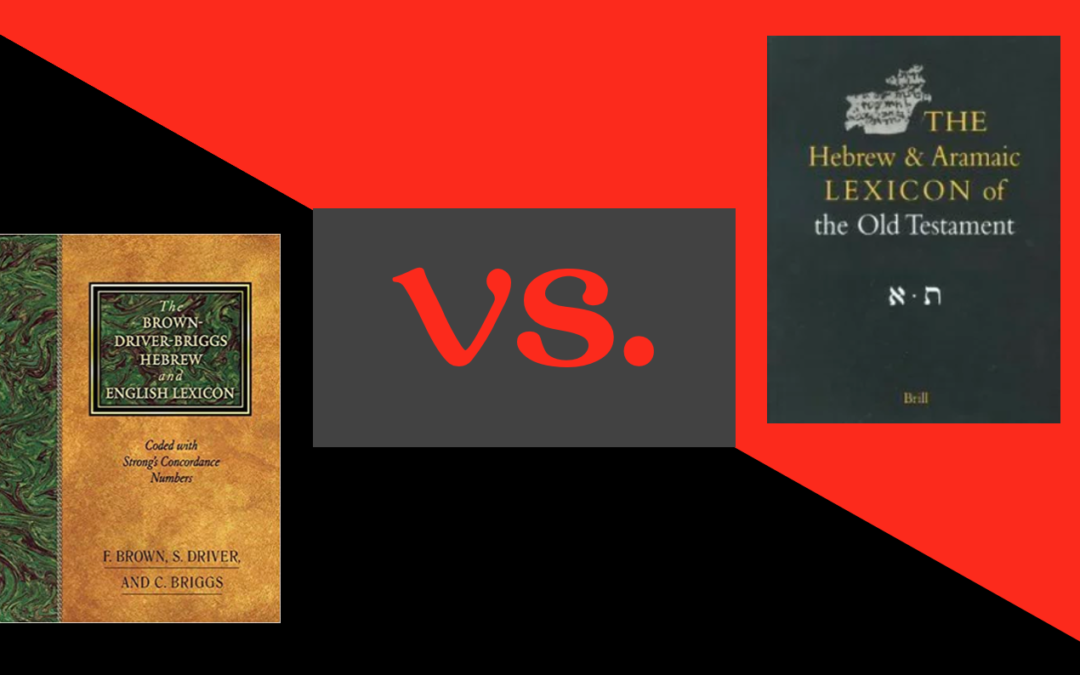 I’ve been studying the book of Haggai for a Sunday school series I’m teaching, and I’ve used it as an opportunity to help answer a common question among pastors, If I already have BDB, should I get HALOT? This is a question about Hebrew lexicons. BDB is short for Brown-Driver-Briggs, the editors of The Brown-Driver-Briggs Hebrew and English Lexicon. This lexicon is older (published in 1907) and cheaper ($25.99 on Amazon). And it has its shortcomings. Some of the glosses are outdated, the bibliographic data is outdated, and its treatment of Semitic cognates is outdated (Chisholm, 14). Perhaps you noticed a theme. HALOT is the acronym for the Hebrew and Aramaic Lexicon of the Old Testament. This lexicon was published over the course of 1994–2000. The backstory is a little complicated, but HALOT is an updated translation of a lexicon originally published in 1953. So by way of analogy, comparing these two Hebrew lexicons is kind of like comparing the two Greek lexicons BDAG and Thayer. But, in order to offer a small measure of help to those faced with the same decision I was, I thought it might be helpful to share my conclusions from my low-level lexical soundings in Haggai I performed. And, as a disclaimer, don’t expect to find any black-belt lexicology here. I’m a general user—just a pastor who wants a good Hebrew lexicon for sermon and teaching prep.

We’ll go three rounds. For each round, I’ll provide a verse in English with the word in bold that we can check against HALOT and BDB. These days, it almost goes without saying that I’m using digital versions of these resources. It’s nice to be able to look up a word with a few clicks, especially when we’re talking about Hebrew words.

HALOT: This is an understandably lengthy entry, but you can see the applicable portion here. Hag.1:12 is highlighted twice under sense “to hear > to listen to, meaning to hearken > to obey.” (The signs ‘>’ means “developed into.”) This reference is listed along with several others where it occurs in Scripture alongside the Hebrew words translated “voice” and “words.”

BDB: This reference is not listed, but there are fifteen constructions and senses listed where this verb is in the Qal verb form with a human person as the subject. After scanning down the list, it looks like m. and n. fit the bill, again appearing in conjunction with the Hebrew words translated “voice” and “words.” We’re given some passages where we can find these uses along with the gloss “obey.”

Evaluation: While BDB made me comb through a long list of possibilities, HALOT made my job easier by listing this reference under its appropriate sense. Plus, HALOT gave us a little more than the one-word gloss of BDB. Round 1 goes to HALOT.

Hag 1:13  Then Haggai, the messenger of the LORD, spoke to the people with the LORD’s message, “I am with you, declares the LORD.”

HALOT: This entry does not include a reference to Hag. 1:13, but you can see this word appears about 360 times in the OT, 12 times in Haggai. Then there’s a little explanation about how this was a fixed technical expression typically used to conclude prophetic utterances, but also, occasionally,  interpolated into the message or used to introduce it. Originally it meant “whispering,” but this developed into “announcement.”

BDB: We learn there are two situations where this word occurs. One, where it’s the utterance of a prophet. Two, where it appears with a divine name and a prophet speaks a divine utterance. Maybe that distinction is helpful, but the glosses are basically the same: “utterance” and “declaration.” Similar to HALOT, there is also a note about how it most frequently occurs at the end of a sentence, yet often in the middle, and rarely at the beginning.

Evaluation: BDB delineates the usage of this word, which might be helpful in some cases. But it doesn’t do much to show how this affects the meaning of the word. I would be fine with either of these, although I prefer the simplicity of HALOT here. I’m handing round 2 to HALOT.

HALOT: Used as a Hiphil, Hag. 1:14 is listed under the sense “to excite, put into motion, start to work.” That’s about it for this one.

BDB: Hag. 1:14 is also included as a reference under the BDB entry for this verb under its usage as a Hiphil. We’re given the sense “rouse, stir up, to activity.”

Evaluation: “To excite” and “to arouse” are two very different things in my mind. Waking someone from their sleep does not necessarily create the same mental representation as exciting someone, but BDB does also include the sense of stirring someone to activity. We’ll call round 3 a tie.

I’m a pastor with average abilities when it comes to my Hebrew exegesis. I’m not doing black-belt lexicology here. But as I performed some basic word study in Haggai using these two Hebrew lexicons, HALOT came out the clear winner. BDB is better than nothing, but HALOT is easier to use and clearer in its presentation. The definitions and glosses in HALOT also seemed more robust.

Let me know if you found this helpful or if you’d like to see a second match!