An Obscure Greek Question No Longer Waiting for an Answer 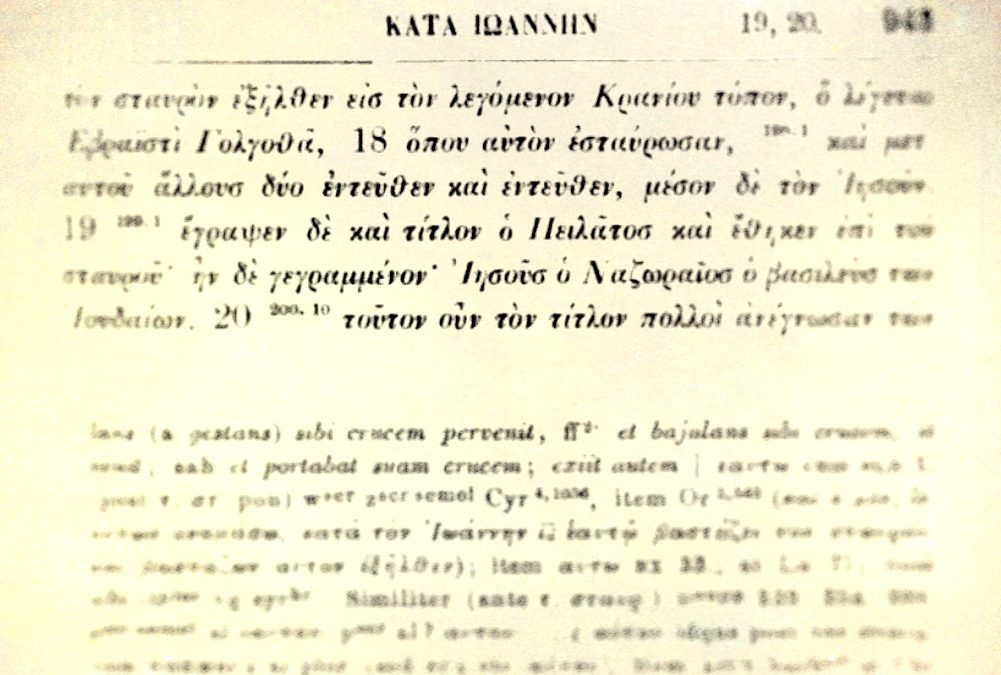 Internet message boards and social networks normally serve as bustling forums where people can ask questions and expect rapid answers. Recently, however, I came across one question that had been languishing in the data dunes for years. Someone was re-asking a question from eight years before that they felt never got its day in court. It centers on John’s account of the crucifixion, specifically his use of an idiom—an expression. It’s one I’ve never considered, and one, to my knowledge, that has received little attention in the literature. Let me show you.

There they crucified him, and with him two others, one on either side, and Jesus between them.

So the idiom in question is this “ἐντεῦθεν καὶ ἐντεῦθεν.” The word ἐντεῦθεν by itself has the sense of “from here.” The idiom, therefore, would have the sense of “from here and from there.” So for eight years, someone was wondering what justification the translators had for translating this as “one on either side.” Why couldn’t we instead understand this verse to mean that there were two others on either side of Jesus—five men on five crosses with Jesus in the center? Is it possible? Well, from the outset, if we keep reading John 19, we see that the question is a non-issue. When we get to v. 32, we’re explicitly told the soldiers broke the legs of the two others crucified with Jesus. There were only three men on crosses. But let’s dig into this idiom further.

Ἐντεῦθεν is an adverb, a word that modifies either a verb, an adjective, or another adverb. An adverb answers questions like: “Where?”, “When?” or “In what way?” The adverb ἐντεῦθεν answers the question “Where?” This makes perfect sense because according to BDF, adverbs ending in -θεν (e.g., πόθεν, ὅθεν, ἔνθεν, etc.) answer the question ‘Whence?’

So if adverbs modify, what is ἐντεῦθεν modifying? Here it modifies the elided verb ἐσταύρωσαν (“they crucified”) describing the action of the Roman soldiers crucifying these two other men with Jesus. John chose not to repeat the verb because it’s understood from the previous clause. Therefore, these two others have been crucified on either side of Jesus. Now let’s look more at this expression.

You actually won’t find this exact construction anywhere else in the New Testament or Septuagint. A much more common idiom that uses a synonymous term is ἔνθεν καὶ ἔνθεν, which occurs over thirty times in the Septuagint. This idiom will also be considered under Example #3 because it can be equated with ἐντεῦθεν καὶ ἐντεῦθεν.

Now, here are three examples from the Septuagint.

In this example, the number one (εἷς) is separately assigned to both sides.

But the hands of Moses became heavy; and taking up a stone, they placed it under him, and he sat upon it. And Aaron and Hur propped up his hands, one on this side and one on that side, and the hands of Moses were firmly supported until the setting of the sun.

In this example, the demonstrative pronoun οὗτος has been separately assigned to both sides. This is similar to what we saw in Example #1 with the number one.

Out of over thirty occurrences of ἔνθεν καὶ ἔνθεν in the Septuagint, only a few have anything to do with cardinal numbers (Ezek 40:10, 41, 48, 49; 41:2), and each of these functions the same way: it states the number with both the first and second occurrence of ἔνθεν. Here’s Ezek 40:10 as a third example.

Again, you can see how number is given to clarify that there were three rooms on each side.

In the first two examples, the number is stated to show that this was how many are on each side separately. Whenever the author wants to make it clear that he is describing two separate entities that should be understood as such, he does so. In Exodus, Aaron was the one at one side of Moses, and Hur was the one on the other. In Ezekiel, there are three rooms on one side and three on the other. This is not the case in John 19:18.

There they crucified him, and with him two others, on one side and on the other side, and Jesus between them.*

If John wanted to say there were two on each side, he would have included a second δύο to read ἄλλους δύο ἐντεῦθεν καὶ δύο ἐντεῦθεν. Among the New Testament and LXX, there is no evidence to be found where a single number serves to indicate that this number was on one side and on the other side. At long last, there is an answer for an eight-year-old question. Even if the question didn’t necessarily need to be answered, I think that doing so helped to shed some additional light on a few words of Scripture.

Thanks to Joey McCollum, good friend and co-editor of Max and Moritz in Biblical Greek, for his helpful input. (If you’ve never heard of Joey McCollum and Stephen L. Brown’s Solid Rock Greek New Testament, you should check it out!)