In 1943, a classics professor at Princeton named P. R. Coleman-Norton—according to his article in a peer-reviewed theology journal—visited a Moroccan mosque, where he saw “a single unnumbered page of Greek” (439). He quickly identified the parchment as a portion of an anonymous Latin commentary on Matthew’s Gospel translated into Greek.

But, what was so fascinating about his discovery was the presence of an unreported agraphon following Matthew 24:51, which is the the end of the parable of the good servant and the wicked servant (Aland no. 297).

An agraphon, from a Greek word meaning “unwritten,” is a saying attributed to Jesus that is not recorded in the four Gospels.

Matthew’s version of the parable ends with these words:

But if that wicked servant says to himself, ‘My master is delayed,’ and begins to beat his fellow servants and eats and drinks with drunkards, the master of that servant will come on a day when he does not expect him and at an hour he does not know and will cut him in pieces and put him with the hypocrites. In that place there will be weeping and gnashing of teeth (Matt. 24:48–51).

But Coleman-Norton’s manuscript, according to his article, added these words at the end.

The article provides this English translation:

And, behold, a certain one of his disciples standing by said unto him: ‘Rabbi (which is to say, being interpreted, Master), how can these things be, if they be toothless?’ And Jesus answered and said: ‘O thou of little faith, trouble not thyself; if haply they will be lacking any teeth, teeth will be provided.

According to Coleman-Norton, the disciples asked Jesus how there could be “gnashing of teeth” for the toothless. Jesus informs them that teeth will be prepared for such people. 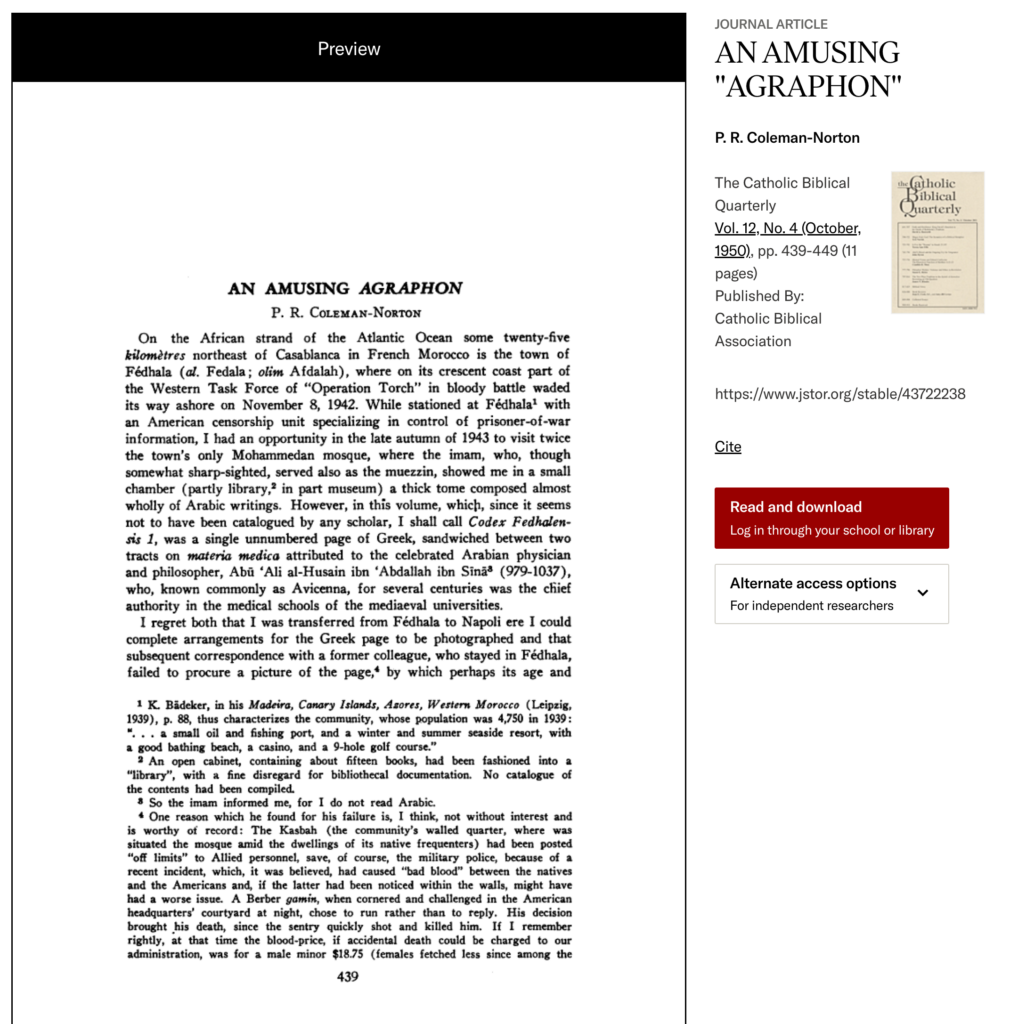 Here it’s important to note that Coleman-Norton titled his article “An Amusing Agraphon.” And, in a footnote, he dismisses the coincidence that this account bears uncanny resemblance to a joke on page 221 of Lewis Copeland’s The World’s Best Jokes. (See image below.)

The respected New Testament scholar Bruce Metzger was a student of Coleman-Nortons. He claims that well before the publication of this article, he heard Coleman-Norton tell a story “about dentures being provided in the next world so that all the damned might be able to weep and gnash their teeth.” Metzger concludes, “However amusing one may regard this account, there is no doubt at all that the agraphon is a forgery” (3).

This agraphon is a forgery. But Scripture does tell us that Jesus did, and no doubt said, much more than what we have record of in Scripture (see John 21:25). Scholars debate the authenticity of other agrapha, there is at least one that we know is authentic. And we know that it’s authentic because it’s in Scripture. It is written, not unwritten.

In Acts 20, Paul is speaking to the Ephesian elders before he goes to Rome. He gives them instructions to take care of the church. And he makes it a point to defend himself against any slanderous accusation that he was in the ministry for the money. Paul says:

In all things I have shown you that by working hard in this way we must help the weak and remember the words of the Lord Jesus, how he himself said, ‘It is more blessed to give than to receive’ (20:35).

We don’t find this logion, or saying of Jesus, in the Gospels, but Luke, just as he did for his Gospel account, would have sought eyewitness testimony. And the subject of giving was not foreign to the curriculum Jesus taught during His earthly ministry, as you can see from these examples.

Give to everyone who begs from you, and from one who takes away your goods do not demand them back (Luke 6:30).

Sell your possessions, and give to the needy. Provide yourselves with moneybags that do not grow old, with a treasure in the heavens that does not fail, where no thief approaches and no moth destroys (Luke 12:33).

God calls us to serve Him by giving to others. The leech with its two daughters “Give and Give” described in Proverbs 30:15 is a picture of greed. Instead of demanding that others give to us, we ought to give to others.

In 1 Clement, a letter written in the late first century and one of the earliest Christian documents we have after the Bible, believers from Rome wrote to believers in Corinth to address some concerns.

But the letter begins with a litany of edifying praise about how godly the Corinthians were. It alludes to this passage from Acts 20:35. The Christians there were “more glad to give than to receive, and content with the provisions that God supplies” (1 Clement 2:1). What happened?

They took on an attitude of unrighteous and ungodly jealousy (1 Clement 3:1–4). And the same is true for us when we hold back from giving, is it not? We act on jealousy, envy, and lust to try –more happiness—is obtained by giving.

Jesus didn’t say that teeth will be given to the toothless, but He did say that it’s more blessed to give than to receive. We should share His attitude.

And what better conclusion than these words from the 19th century from Jamieson, Fausset, and Brown in their commentary on this passage in Acts:

This golden saying, snatched from oblivion, and here added to the Church’s abiding treasures, is apt to beget the wish that more of what issued from those Lips which “dropped as an honeycomb,” had been preserved to us.

Help the weak and remember the words of the Lord Jesus: “It is more blessed to give than to receive.’”

Photo by Enis Yavuz on Unsplash.