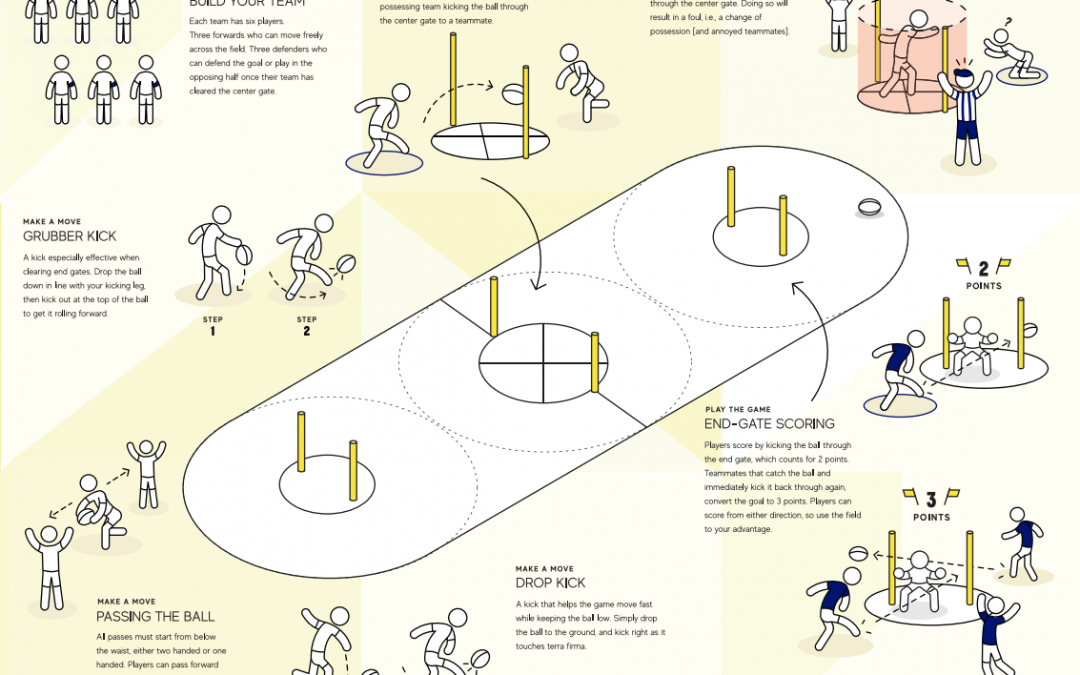 Amidst fears of artificial intelligence taking over the world, it has created a new sport. It’s called Speedgate. And when I first heard about a sport that combines elements of rugby, ultimate frisbee, soccer, and croquet—I wanted to try it.

You can check out the official website here. According to the game’s AKQA, the people behind the game,

Our AI systems processed over 400 popular sports from around the world.

We used deep learning algorithms, from text-generating RNNs to image-generating DCGANs, to create ideas for every aspect of this new, unique sport; from the gameplay, to the rules and even the logo.

More than 1,000 outputs were analyzed and narrowed down to ten potential concepts. Three were field tested.

Unique in ever way, Speedgate combines familiar elements of croquet, rugby and soccer.

Several weeks ago, I set up a Speedgate field and gathered a group of high schoolers and college students to play. It took some money and prep work, but it was a fun game that everyone seemed to enjoy. This is my review of our experience taking Speedgate for a test drive.

We already had jerseys and small orange cones on hand. The Field Guide also says you can substitute a football or soccer ball for the rugby ball. The gates are important, and the slalom poles are nice, but you could make do with cones.

You need some open space, at least a piece of grassy real estate 180’ long and 60’ wide. The field consists of three circles set end to end, each 60’ in diameter. This was a little tricky to lay out.  I measured a 30’ length of rope and anchored it where I wanted the middle of each circle to be. Then I walked an orbit around this center point while spray painting a line. It turned out okay. There’s probably a better way to do this. It was also difficult to be sure my three circles were in a straight line. But I felt I was able to get it fairly close by eyeballing things. Even after painting the field, I still ended up marking the border with a bunch of small orange cones. If I did it again, I would probably skip the spray paint for the boundaries and simply go with cones. You can adjust cones until you get everything right, plus it would lower the cost. I would still recommend you paint the gates, but that’s pretty simple.

After getting the hang of throwing underhand and not running through the center gate, Speedgate is a ton of fun. The rules are pretty simple. Everyone can be as involved as they want to be. Most of us had never touched a rugby ball before and everyone felt it was much easier to catch than a football. The game is designed for 12 players on the field plus a few subs. You would want to take that into account based on how many people you’re looking to involve. The game does seem to fly by. There are three seven-minute periods. That’s it and it goes fast. Teams might not mind waiting out for a game since they’re so short. If that’s the case, you could feasibly run a bracket for four teams. That would work well for larger groups.

My experience with Speedgate was overwhelmingly positive, but here are a few issues we came across.

Speedgate is intended to be an accessible no contact sport. The rules state,

Body blocking is allowed in a nonagressive manner.

But at least two factors greatly increase the chance of aggressive contact.

First, loose balls. According to the rules, “The ball is allowed to touch the ground.” This means a ball on the ground from a kick or incomplete pass is anybody’s ball. We had our fair share of diving for fumbles. You may want to decide whether or not you want to permit diving. The second factor is the three-second rule. When you get the ball, you have three seconds to pass or kick it. After three seconds, players from the opposing team can go after the ball. This equates to players often wrestling over the ball after three seconds. This then quickly becomes a stalemate. So what should you do? Call for a jump ball? A better alternative might be to eliminate the three-second rule and instead give the player with the ball ten seconds to pass or kick. If they exceed that ten-second limit, the ball goes to the opposing team.

This one isn’t a huge deal, but our kickoff experience did not feel like the one described in the rules. “Games start with the possessing team kicking the ball through the center gate to a teammate.” In reality, players from both teams are lined along the perimeter of the center gate vying for the ball after it’s kicked. You might try to kick the ball through the gate to your teammate, but you might just as well kick it to one of your opponents. This could just be how the game is designed. I don’t really see any way to change it.

Teams are made of six players—three offense and three defense. Defenders cannot cross the center line until their team clears the center gate. Players seemed to struggle to remember this. Our referees had a hard time keeping track of this—knowing who is on offense and who is on defense. I would just scrap this rule.

This observation requires a little more explanation. There are two ways to commit fouls with the gates. Stepping into the center gate is a foul. The ball changes possession so the non-fouling team gets it. The second way to foul is by having more than one defender in the end-gate. The conundrum is that it’s possible for the defending team to use this to their advantage. If my opponent has the ball and they’ve cleared the center gate, my team has nothing to lose by stepping into the center gate. In fact, it can be to the defending teams advantage if the referee calls a foul and stops play. And if the referee does not stop play, it still gives the defending team a shortcut across the field. It’s a similar scenario with defending an end-gate. If my opponent is trying to score, why not just have two defenders enter the end-gate to stop play with a foul? As a fix, our clever referee began awarding penalty kicks to the team that was fouled. If you’re fouled and score, no big deal. If you’re fouled and don’t score, you get a PK from the center of the field with no one defending the end-gate.

Speedgate is a lot of fun. It’s pretty easy to prepare for  and learn if you’re okay with a little upfront cost and prep work. There are still a few kinks to still work out. But it’s still fully playable and plenty of fun. Until the Speedgate governing body defines the rules, you might just need to implement a few house rules of your own.