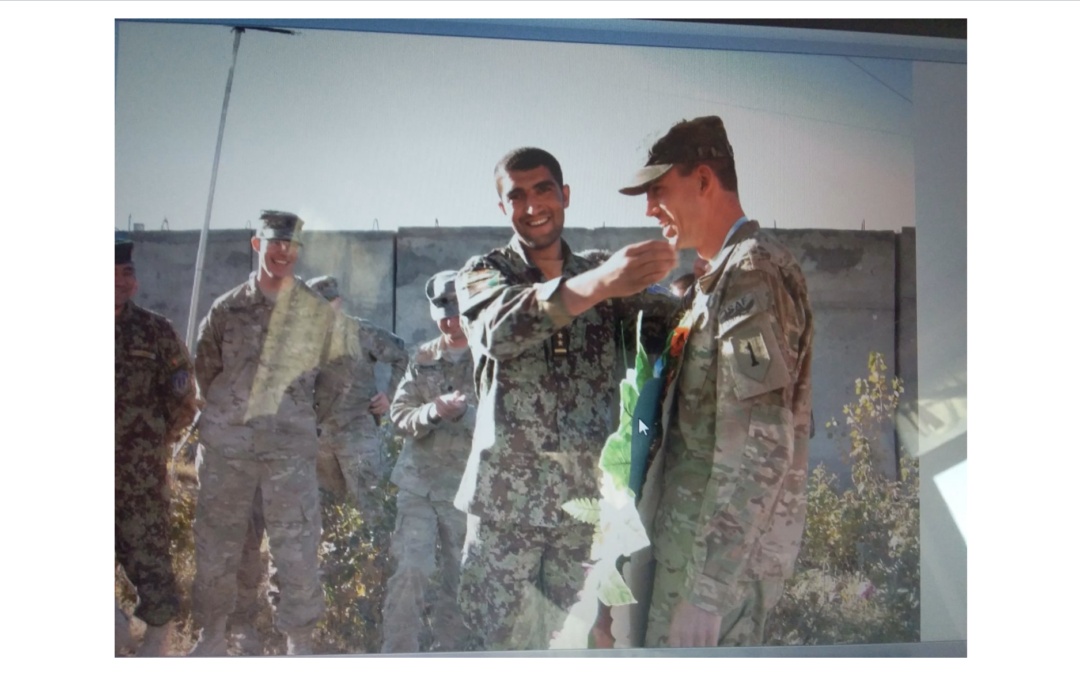 On Saturday 26 September 2020 at approximately 8:00 am local time, my good friend Captain Farid Ahmad Khpalwak was killed by insurgents at a Taliban checkpoint in Pul-e Qandahari, Logar Province. His three fellow Afghan National Army soldiers travelling with him on their return journey from Kabul to FOB Thunder in Gardez, Paktiya were also killed.

Four men driving to work. And the Taliban shot them dead.

Farid and I met during my U.S. Army deployment to Afghanistan in 2012–2013. We worked together almost every day and stayed in regular contact ever since. We were good friends. He sent me the picture at the top of this post. He’s hanging some traditional Afghan flower thing around my neck during my promotion ceremony.

Farid lived under constant threat from the Taliban. They bombed his house; they killed his father and uncle. So Farid’s family was forced to leave their home in Logar and move to Kabul for their safety. He was married. He had a young son.

I cried when Farid’s brother contacted me Sunday night with the news. You’ve surely done the same over someone or multiple someones before. We’re all sad when we lose people. This is just a simple remembrance of Farid. He was a dedicated soldier, husband, father, brother, and friend. He was a brave man. He’s a hero who loved his country.

The last message he sent me was on 23 September: “Hello my friend what is news.”

I had hopes of helping him escape Afghanistan. We tried many things. None worked. I had hopes of him reading the Bible in Dari so we could discuss the gospel. To my knowledge, he never did. He died at the age of 31.

This post will mean little to anyone in my part of the world. His departure from this earth impacts many more in Afghanistan. My purpose in writing this is to celebrate a friend’s life and to honour his sacrifice. And what better reminder is there to take nothing for granted. Freedom, friendships, tomorrow. Anything. And it’s also the perfect time to affirm that God is good. God is sovereign. He planned this and everything else. And He has a righteous purpose in doing so.

I am God, and there is none like me, declaring the end from the beginning and from ancient times things not yet done, saying, ‘My counsel shall stand, and I will accomplish all my purpose,’ (Isa 46:9–10)

This remains true. And this loss remains sad.