Is New Docs Something New to You? 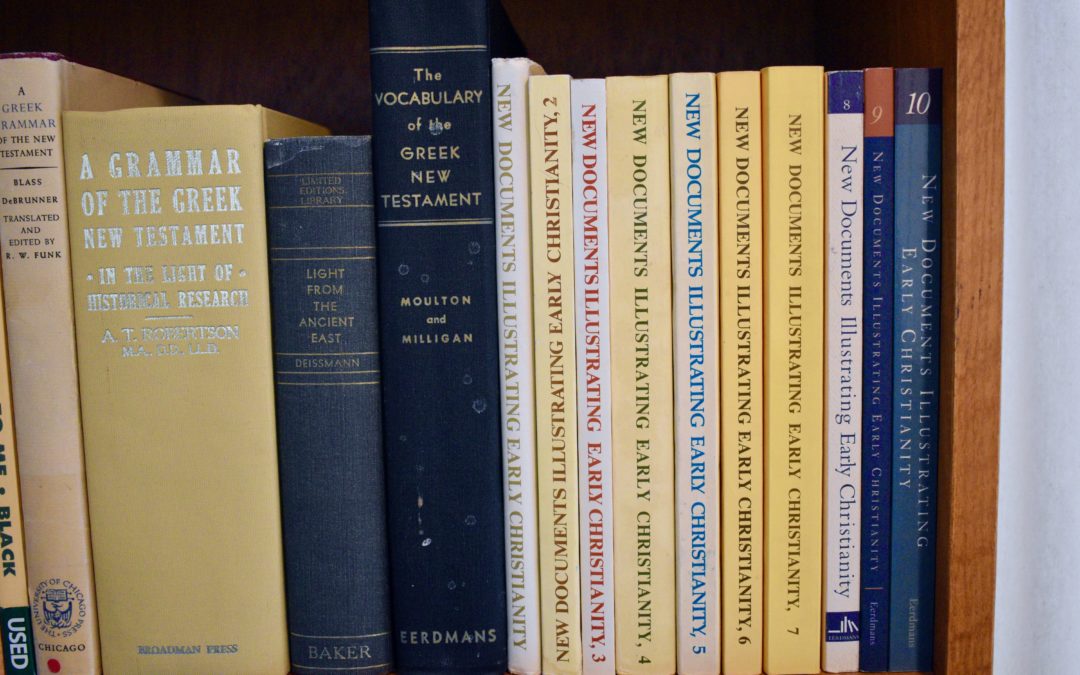 For those who study the Greek New Testament, there’s a set of lexical tools that don’t receive enough attention. It’s a set of slim-ish, mismatched volumes that offer a glimpse into how the words of the New Testament were used in real-life historical contexts. There are currently ten volumes in the New Documents Illustrating Early Christianity series (commonly abbreviated New Docs.) These books present a review of newly discovered papyri and inscriptions that make an impressive contribution to our understanding of early Christianity. Each book is a digest intended to make New Testament researchers, teachers, and students aware of published texts that will be of historical or philological interest. The entries offer ancient texts, fresh translations and substantive discussions. Below I offer some comments on positives and negatives followed by a short summary of what you can find in each volume.

The Positives and the Pitfalls

I would say the positives far outweigh any negatives. Moulton and Mlligan’s The Vocabulary of the Greek New Testament illustrated from the Papyri and other non-literary sources (MM) and Deissman’s Light from the Ancient East are wonderful contributions to our field. But there have been plenty of discoveries since these works were published. There is more evidence than you can shake a lexicon at. Who can keep up with it all? New Docs is an attempt to keep up with the steady flow of newly published evidence. It’s not a perfect solution. The last volume was published eight years ago and brings us up to 1992. But it is an amazing resource that captures 15+ years of additional research on Greek papyri and inscriptions that we did not have easy access to.

If you don’t have access to an institution with New Docs among its holdings, prepare yourself for a small scavenger hunt to locate all ten volumes for a reasonable price. But you should be able to find all ten on Amazon and other online booksellers. Unfortunately, there is no digital offering of this resource. Just be prepared to ferret the Greek words you’re hunting for out of the indices. Each volume comes fully equipped with them. And volumes five and ten each contain an index of Greek words that, combined, cover the entire set. Scripture indices are also a nice benefit. Perhaps you’ve also noticed that BDAG sometimes cites New Docs at the end of an entry—all the way up through volume eight. Those helpful citations are a nice tip to flip to the cited New Docs entry for further reading.

Each volume has something different to offer. Below I’ve listed some basic information for each one that includes a brief description of their contents.

The texts included in this volume appeared in 1976 in either publications or reissues. There are 32 entries on texts that deal with New Testament context, a series of minor philological notes on words and names appearing in the NT, a handful of biblical and related citations, some Judaica, some church-specific entries, and five miscellaneous entries. In my collection, this is the only one in hardback.

The inscriptions and papyri reviewed in this book were published in 1977. It follows the same scheme as the previous volume sans Judaica. The number of minor philological notes is also substantially larger.

If you guessed this volume reviews papyri and inscriptions published in 1978, you are correct. Same categories and Judaica is back.

Greek papyri and inscriptions published in 1979. And this volume is one of the thicker ones. Actually, I just checked. It’s the thickest. Volume 7 is a close second. You’ll find all the usual categories and lots of entries.

The editors use this one to take a pause and evaluate what they’ve learned so far in the form of five linguistic essays. They are:

Reviewing documentary evidence from 1980 and 1981, there is a greater emphasis placed on social history than what was present in previous volumes. The categories are:

This one reviews papyri and inscriptions published in 1982 and 1983. Stephen Llewelyn took over for George Horsley as editor. The categories have also changed. In this volume, they are:

Covering inscriptions and papyri published in 1986 and 1987, the reduced categories include inscriptions, papyri, Judaica, and ecclesiastica.

The last volume to be published reviews papyri and inscriptions published between 1988 and 1992. The categories are: