Frogs, an Eagle, Monkeys, and Giving: The Lexical Intersection Between the Greek New Testament and Aesop’s Fables

BDAG, the standard Greek lexicon for reading the New Testament, has somewhere around 180 references to the Greek text of Aesop’s Fables. You’re probably familiar with some of Aesop’s Fables—for instance, maybe the one about the thirsty crow who fills a pitcher with stones to raise the water level. But here’s one you probably haven’t heard before: “The Frogs at the Sun’s Wedding.” What follows is the English translation from Ben Edwin Perry’s 1965 Loeb edition.

The Sun was celebrating his wedding. It was summer-time and all the animals were taking part in the gay festivities in honor of the god. Aye, and the frogs too were holding a dance in the marsh. But a toad stopped their proceedings when he said: “This occasion calls for no festal songs on our part, but is something to worry about, a matter of grief. For if our Sun, even in his singleness, dries up every pool, what ills shall we not suffer if, after marrying, he begets a son like himself?”

Many are so exceedingly light-headed that they rejoice over things that later they are bound to rue (37).

We know from The Flintsones theme song, written in the early 1960s, that the gay festivities of the animals are happy just like you would have a gay old yabba dabba doo time with Fred, Wilma, and the gang. And it’s actually this word translated here as “gay” that I want to begin with. 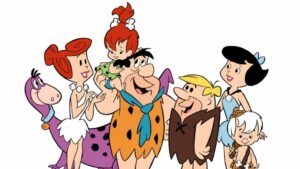 This is the Greek word ἱλαρός, which kind of sounds like the English word “hilarious.” And preachers have been quick to point this out in sermons that include those words found in 2 Corinthians 9:7: “…God loves a cheerful giver.” A preacher might claim that God loves a hilarious giver, which is nonsense (34). The Christian’s giving isn’t hilarious. But do you know what is kind of hilarious? Frogs celebrating a wedding. As Perry’s translation of this fable from Aesop informs us, they’re having a gay old time. Weddings are happy. They’re cheerful celebrations. That’s why the frogs are cheerful. And it’s cheerfulness that the Apostle Paul has in mind when he discusses giving in 2 Cor. 9:7.

Paul has been talking about making financial contributions towards the work of the Lord. He just said “whoever sows sparingly will also reap sparingly, and whoever sows bountifully will also reap bountifully” (2 Cor. 9:6). One of the reasons he wrote this letter to the Corinthians was to encourage them to give generously towards a relief offering for the believers in Jerusalem. There was a pressing need and this was a priority of Paul’s ministry. And this verse motivates us to not merely give, but to give cheerfully.

The frogs at the Sun’s wedding are cheerful. And then they’re not. The rejoicing ceases because they see a downside to what they’re rejoicing over. If the Sun gets married and has a little baby son, it’s going to dry up all the water. If the Sun gets married, they won’t be cheerful. They’ll be grieved—much like the eagle in another one of Aesop’s Fables.

Giving should not cause grief. If you don’t mind me sharing one or two more of these fables to illustrate, this one is called “The Eagle who had his Wings Cropped.”

Once an eagle was caught by a man who cropped his wings and turned him loose with the domestic fowls. But the eagle was dejected and so unhappy that he wouldn’t eat. He was like a king in chains. But another man bought him, lifted his wings, rubbed them with myrrh, and made the feathers grow again. He took flight, seized a rabbit in his talons, and brought it as a gift to the man. Then a fox who saw this said, “Don’t give it to him; give it to the first man. This one is naturally good. You had better court the favour of the other one so that, if he catches you again, he won’t rob you of your wings” (478).

The eagle was sad. He was unhappy. Wouldn’t you be if you could no longer soar from rocky coast to golden shore? 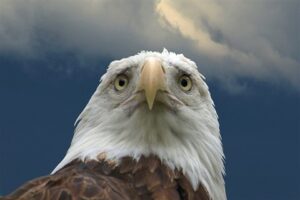 Each one must give as he has decided in his heart, not reluctantly or under compulsion, for God loves a cheerful giver (2 Cor. 9:7).

The KJV, NASB and others go with “grudgingly,” which might hit closer to the mark. Don’t give grudgingly.

But this passage gives us one specific reason. This is why we should be cheerful givers instead of sorrowful givers. Why? God loves a cheerful giver.

And to illustrate this word, I submit one final fable: “The Monkey and Her Two Children.”

Because to hate some people is better than to love.

*This is my translation of the Fabulae Aesopicae Collectae, Halm, Teubner, 1872 edition. It also appears as Perry 218, Babrius 35, and Chambry 307. 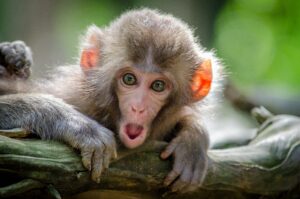 In this morbid story, the mama monkey’s love is confusing and poorly demonstrated. She kills the baby monkey she loves so, in this instance, it’s better to be hated by her than loved. Fortunately, God’s love for cheerful givers is not confusing. And it’s perfectly demonstrated. We know God’s wonderful demonstration of love is what Paul described earlier on in 2 Cor. 5:21: “For our sake he made him to be sin who knew no sin, so that in him we might become the righteousness of God.”

God expressed His love in this way. And, as Colin Kruse puts it,God’s love “is completely undeserved and astonishingly generous” (216). And, as David Garland puts it, it’s not that God doesn’t love the sorrowful giver. He loves them. His love here should be thought of as approval (407). He delights in this kind of giver. He takes pleasure in this kind of giver. (I wonder if BDAG should have included the reference to 2 Cor. 9:7 under this sense—sense two—instead of sense one.) So, in a way, we can get a sense of God’s love from the monkey mama in that she took pleasure in her child. That baby had his mom’s approval. The cheerful giver has God’s approval. That’s our motivation to give happily to God with our money, our resources, time, and service. God takes pleasure in our giving when we do it cheerfully.

Each one must give as he has decided in his heart, not reluctantly or under compulsion, for God loves a cheerful giver (2 Cor. 9:7).

Give as you’ve decided in your heart. Paul doesn’t provide an algorithm. There’s no set number or percentage found in this verse. There’s not even a command—that’s been supplied in our English translations. This passage leaves it up to the believer to decide how much to give. It’s voluntary. It’s not about how much you give, but how you give. So give to God cheerfully like a frog at a wedding although not like the one who feared what he would lose.) Give cheerfully and not unhappily like an eagle with his wings clipped. Know that God takes pleasure in the Christian who gives happily. He loves a cheerful giver; and He does so much better than a mama monkey. 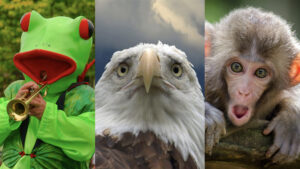 If you haven’t seen it already, check out this introductory on how to explore the Aesop citations in BDAG: Bauer, Danker, Arndt, Gingrich, and Aesop.

Special thanks to W. Andrew Smith for correcting my English translation of the moral conclusion to “The Monkey and Her Two Children.”