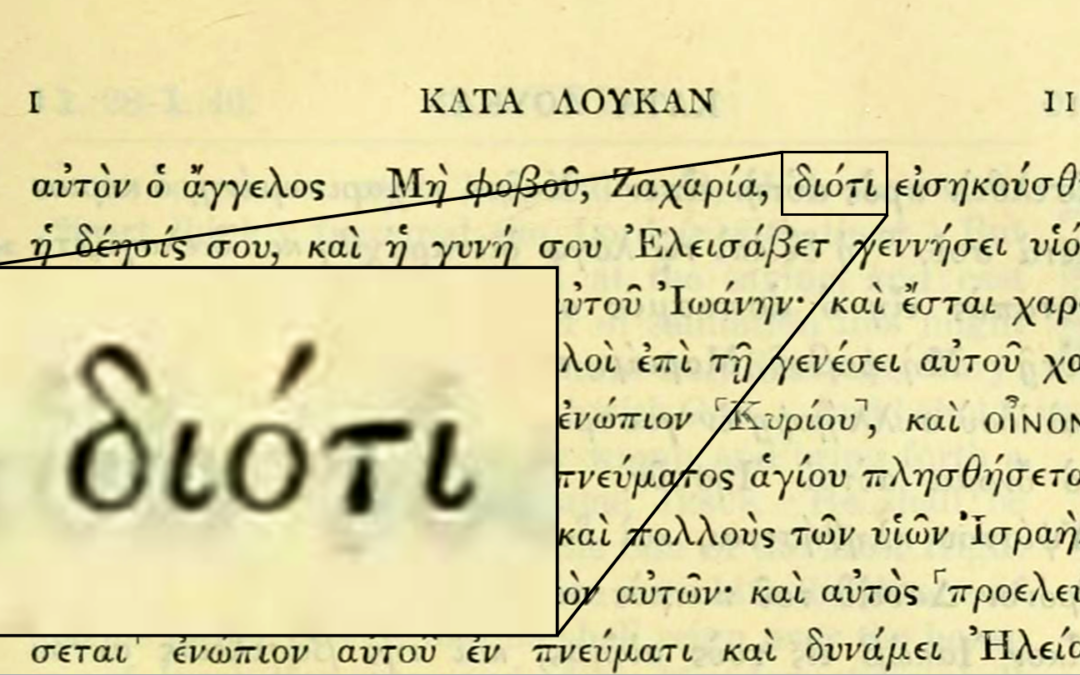 Chris Fresch recently raised an intriguing desideratum during the Amos session of the Cambridge Septuagint Series. Someone needs to analyze the pragmatics of the conjunction διότι. I won’t be the one to produce a clean linguistic analysis, but I would like to record my observations and conclusions as I explore this conjunction. Usually translated as for or because in the NT, we could use a better understanding of this word that appears 22 times in the NT. I’ll be building this airplane as I fly it. (That’s the beauty of blogging.) Here’s a tentative outline of four broad stages to this project:

Beginning with stage one, I’ll consider four questions in this introduction.

1. What is a conjunction?
2. What is pragmatics?
3. What is διότι?
4. How is διότι used in the Apostolic Fathers?
5. Conclusion

Question 1. What is a conjunction?

Let’s start with the basics: What is a conjunction? I don’t think I can put it any better than Mathewson and Emig:

Conjunctions, or connectors, are small, indeclinable words (function words) that join and relate various words or groups of words to each other, from single words to clauses and larger units of discourse. They “make explicit implicit relations between clauses.” Therefore, conjunctions are one of the clearest indications of how a discourse is to be “put together” by the reader (258–259).

Simply put, a conjunction is a linking word that either coordinates or subordinates one utterance to another.

Question 2. What is pragmatics?

The simplest way to think of pragmatics is “speaker meaning.” If we consult the perennially helpful SIL Glossary of Linguistic Terms, we find this definition:

Pragmatics is the study of the aspects of meaning and language use that are dependent on the speaker, the addressee and other features of the context of utterance, such as the following:

The effect that the following have on the speaker’s choice of expression and the addressee’s interpretation of an utterance:

In other words, pragmatics deals with the relation of linguistic signs to interpreters—describing meaning in relation to speakers and hearers (Saeed, 17). It’s concerned with the meaning for the speaker and hearer. Pragmatics is all about what effect a word has in its context rather than from its inherent semantic meaning (Runge, 7). Semantics is important, and that’s where I’m going to start, but we can’t ignore pragmatics as Steven Runge reminds us in his warning:

Distinguishing semantic meaning from pragmatic effect is critical to providing a coherent and accurate description of the device and its function within the discourse. Neglecting this distinction leaves you with “messy discourse”! (9)

The tricky part is that observable syntax doesn’t necessarily inform our understanding of pragmatics. As Susumu Kuno puts it, “pragmatics treats phenomena which do not usually interact closely with syntactic rules.” She uses the example of asking someone: “Could you pass me the salt?” Syntactically, this is a request for information. But pragmatically, it has the communicative effect of a request for action (276–277). When it comes to pragmatics, we want to know what the speaker is doing by choosing to use the word διότι in their discourse.

Question 3: What is διότι?

For this part, I’ll give a quick rundown of what the lexicons and grammars have to say about this word. We’re not equipped to consider the pragmatics yet. The traditional explanation of διότι is it can both perform (1.) the logical function of introducing an inference and (2.) the adverbial function of marking an utterance as causal (see Wallace, 761 and Long, 116). It’s usually translated because, since, or for (von Siebenthal, 424).

What does our trusted authority BDAG have to say? According to BDAG, διότι is a conjunction and “a marker used to establish an intimate connection between two statements.” And, as a marker, it can perform four functions.

And, to solicit a second opinion, let’s look at the Exegetical Dictionary of the New Testament. This source gives us the following three-part formula:

Two functions, four functions, and three functions depending on where you look. But, from the perspective of lexical meaning, we have a pretty good sense of how to understand this word. From the perspective of pragmatics, our only potential clue is BDAG’s fourth function of marking a clause as discourse content. But that is uncertain because BDAG only gives one NT reference under this category (Rom 8:21) and it’s a variant reading. To get a better taste for διότι, let’s turn to the Apostolic Fathers to inspect its three occurrences of this word.

Question 4. How is διότι used in the Apostolic Fathers?

This word appears three times in the Apostolic Fathers—a decent habitat to observe this word in the wild. Let’s consider each occurrence using the Greek text and English translation from the edition Michael W. Holmes. Taking a cue from Kecskés on corpus analysis, we will analyze the text for its component discourse units before attempting to understand the pragmatic effect of διότι (Kecskes, 234–235). I’ll tag each component using the outline annotations used in Steven Runge’s Lexham Discourse Greek New Testament.

“And who are the ones who are being brought and placed in the building?”
“They are young in faith and faithful;
but they are warned by the angels to do good,
because wickedness was not found in them.”

The lady is explaining this vision of a tower to the protagonist, and there’s a question about the symbolism of the stones being used for the construction of the building. The lady reveals the spiritual condition of the people the stones represent. And then she brings up these angels who warned the people to do good in light of the fact wickedness was not found in them. But what function is διότι performing here? Is there somehow a causal relationship between these two clauses? But then, if there was no wickedness found in these people, why did the angels warn them to do good? I’m not exactly sure. Let’s look at the second occurrence of διότι.

I said to him,
“Sire, these commandments are great
and good
and glorious,
and are able to gladden the heart of the one who is able to keep them.
But I do not know if these commandments can be kept by a human,
for they are very hard.

The author makes an analogy between the soul’s relationship to the body and the Christian’s relationship to the world. Just as the flesh hates the soul, so the world hates Christians. And the reason the flesh hates the soul is because the soul hinders the flesh from indulging in its pleasures. What function is διότι performing here? Again, it’s serving as a marker to indicate the validity of the preceding statement. What’s particularly interesting about this occurrence is that it’s used in parallel to ὅτι in the explanation of why the world hates Christians. Why did the author choose διότι in the first instance, but ὅτι in the second? Is there some pragmatic effect in doing so? We’ll have to see what we can determine as we proceed to the Septuagint next time.

My ultimate goal as an exegete is to understand what NT writers were doing with διότι in Scripture. In order to do so, my methodology will be cross-linguistic since we have a large dataset and parallel corpora in the Septuagint and Hebrew Bible. I’ll compare source and target language to draw conclusions on how the Septuagint translators perceived the discourse function of διότι. I will then apply my assessment to the NT passages where this word occurs.