We live in a golden age of books for anyone who wants to read and grow in the biblical languages. There are reader’s editions of the Hebrew Bible, the Greek New Testament, and even the Greek Old Testament. There are lexical aids, devotionals, and even a translation of Beatrix Potter’s The Tale of Peter Rabbit into Koine Greek. Is there room to publish anything else we can read in biblical Hebrew and Greek? I’m convinced there is.

Jacob N. Cerone and Matthew C. Fisher have seized an opportunity to further edify and encourage Greek, Hebrew, and Latin readers with Daily Scriptures: 365 Readings in Greek, Hebrew, and Latin from Eerdmans. For each day of the year, there is a short OT and NT reading. The OT passage appears in Hebrew and Greek, and the NT selection is given in Greek and Latin. All ancient language texts come from the German Bible Society. The Hebrew text is taken from Biblia Hebraica Stuttgartensia, the Septuagint text is Hanhart’s revision of Rahlfs’s Septuaginta, the Greek New Testament text is NA28, and the Latin is the fifth edition of Biblia Sacra Iuxta Vulgatam Versionem.

As you would expect, Cerone and Fisher provide glosses and morphological data for infrequent vocabulary. They provide these for terms so based on the following thresholds:

The introduction promises two Aramaic passages from Daniel, but I only see one in the index. For that passage (Dan. 7:13), every Aramaic word is glossed. 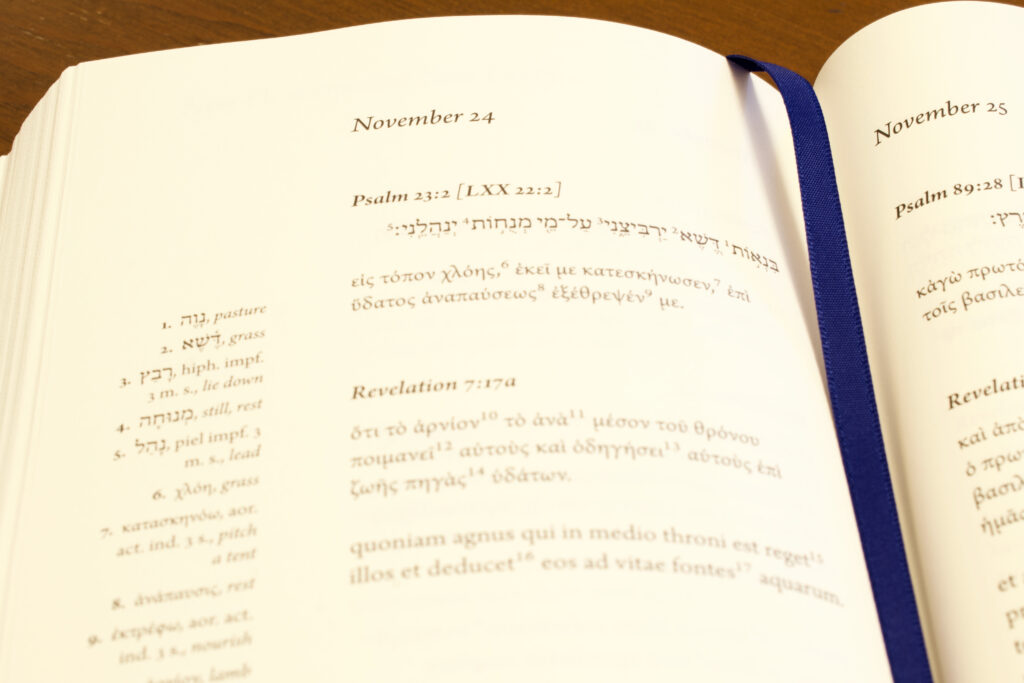 Daily Scripture succeeds in providing another way to read the text, but it also fills an important devotional role. Readings are not arranged by difficulty level, Old and New Testament passages are intentionally paired to show their intertextual connections. It was striking to note the similarities between  Old Testament prophetic passages on judgment and the new heavens and new earth and their New Testament fulfillments. Each reading throughout the book is a single verse or portion of a single verse. And they are thoughtfully arranged in a creation, fall, redemption progression with an appropriately timed section dedicated to advent readings. The advent section begins with the verses comprising Hannah’s prayer from 1 Samuel 2 paired alongside Mary’s Magnificat from Luke 1. (Providentially, both happen to be ten verses in length.)

This is a wonderful book that will benefit anyone studying the biblical languages. Its inclusion of five ancient languages alone is reason to pick up a copy. The Greek readings for both OT and NT texts make it so you can still make excellent use of this book without a knowledge of Hebrew. And if, like me, you do not read Latin, the editors pitch it as a reading help due to the similarities between many English and Latin words.

Another beauty of this work is that it doesn’t require a major time commitment. With its classy dust jacket, it looks great in the living room. I’ve been pulling it off the shelf every morning to read with a cup of tea before taking the dog out for his walk. I hope creative scholars such as Cerone and Fisher along with publishers such as Eerdmans continue to come up with brilliant ways to keep us in the biblical languages.

Special thanks to Eerdmans for a free review copy of this book. This did not affect my thoughts in any way so far as I know.