Corn and Unicorns: Misleading Mental Representations from the KJV 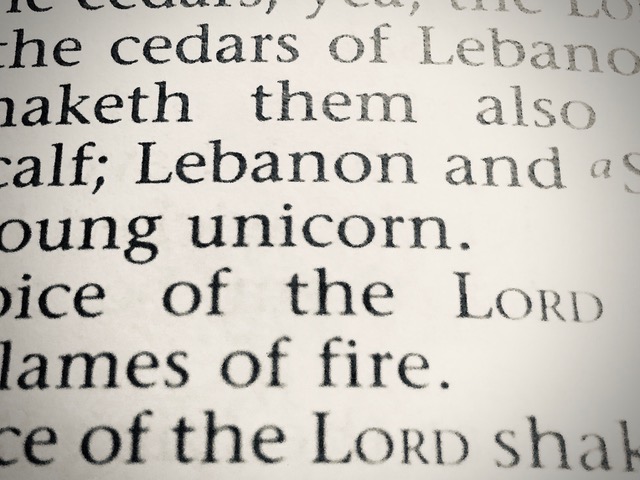 Mark Ward, both on his blog and in his book, has done a lot of good work on exposing “false friends” in the King James Version. These are words that meant something different to the 1611 translators than they mean to readers today. And the KJV is crawling with them (e.g., bowels, conversation, swellings). The contemporary reader is at a loss to read such words without the Oxford English Dictionary—but such readers won’t know to pull out that dictionary, because they will not realize they are misunderstanding.

I want to show what happens when—through no fault of the KJV translators (as Mark often says), nor through deficient English education today, but solely because of the inevitable process of language change—the KJV produces the wrong “mental representation” to the reader.

Imagine you were to offer a tuna sandwich to a friend who just moved here from a Spanish-speaking country. English is his second language. And when he processes “Would you like a tuna sandwich?” his English sea creature vocabulary fails them, and their mental model does not match yours. Although you were referring to a fish, in Spanish, tuna means prickly-pear. And he gives you a funny look.

These mental models are called “mental representations.” And you’re constructing them every time you read (or listen to) a text. It’s how your brain makes sense of all the different entities, properties, and relations you encounter. When you read a text, you’re building a lightning-fast mental representation to match the same mental representation the author had when he wrote down his words. You’re experiencing the author’s world by proxy. At least, you hope you are. Because, as demonstrated with the tuna sandwich misunderstanding, translations can mislead us. We can build the wrong mental representations when something steps in to disrupt the lightning. And yet it all happens so fast that we don’t realize we’ve misunderstood. We then do not correctly experience the world someone wanted us to experience.

We need the correct concepts to construct the correct mental model. The whole purpose of a text is to allow us to experience the author’s world. A text that does not make that experience possible is problematic, whether it’s a tuna sandwich in your hand or the Bible in your hand. Every Bible translation on the shelf is a text intended to give the reader a mental representation. Everyone who takes God and His Word seriously wants the correct mental representation.

Below, I’ve given three examples from the Old Testament, where the typical reader is not going to experience the author’s world by proxy. Your experience will be different. The entities in this translation will mislead you. My daughter is ten, and she kindly provided drawings of these entities as a depiction of her own mental representation from reading these passages.

It’s Egypt. Pharaoh has a couple of dreams that Joseph is going to end up interpreting. Here’s how one of them starts:

Gen 41:5  And he slept and dreamed the second time: and, behold, seven ears of corn came up upon one stalk, rank and good.

Pharaoh dreams about a stalk with seven ears of corn. They’re good and they’re rank. Not like stinky tofu or the durian fruit. Rank was an old way (so says the OED) to say “plump” or “fat.” So we’re talking big healthy ears of corn here. Ignoring the challenge of understanding “rank” then, if you’re an American reader, this is probably similar to your mental representation.

You’re thinking maize. But you’ve built the wrong mental representation. How could that be? The verse mentions ears of corn and a stalk. Sounds like corn to me. In the KJV, though, the entity “corn” is a cereal plant. In a modern translation, you would read “grain.” Takes the CSB for example:

Gen. 41:5  He fell asleep and dreamed a second time: Seven heads of grain, plump and good, came up on one stalk.

See how you can correctly construct your mental representation when you have the correct entity? This is how Bible reading should be. Access requirements should be reasonable. Translation should be intuitive whenever possible. Here, readers need grain, not corn. Here’s a second example.

Now, we’re in the Valley of Elah. And there’s a physical description of Goliath, the Philistine giant. Here’s part of it.

1 Sam. 17:6  And he had greaves of brass upon his legs, and a target of brass between his shoulders.

Greaves are armor to cover the shins. But what is this target? Why would a soldier wear a target? Perhaps this is a brazen act to play up the futility of attacking him. Here’s another picture.

Okay, so after checking the Oxford English Dictionary, I see a target is “a light round shield or buckler.” So my daughter’s drawing isn’t actually too far off. She was trying to draw a traditional bullseye target, but it does resemble a round shield. But, here’s the rub: What Goliath has on his back is neither target nor shield. The Hebrew term is disputed to some degree, but scholars agree it’s some kind of weapon, be it javelin, sword or scimitar (154). Bottom line, Goliath had a weapon on his back. The author of 1 Samuel chose to give this physical description so readers could construct a mental representation. The KJV gives you the wrong entity to do your constructing. Here’s the text from the ESV:

1Sam. 17:6  And he had bronze armor on his legs, and a javelin of bronze slung between his shoulders.

You need the correct entities to experience the author’s world. Translators strive for accuracy to the best of their resources and abilities. The KJV translators were aware of the challenge they faced. In their preface, they admit their uncertainty over rare words and terms for birds, animals, and minerals. They wrote,

There be many words in the Scriptures which be never found there but once (having neither brother nor neighbour, as the Hebrews speak), so that we cannot be helped by conference of places. Again, there be many rare names of certain birds, beasts and precious stones, etc., concerning which the Hebrews themselves are so divided among themselves for judgement that they may seem to have defined this or that, rather because they would say something than because they were sure of that which they said…1David Norton, ed., The New Cambridge Paragraph Bible with the Apocrypha: King James Version, Revised edition., vol. 1 (Cambridge, UK: Cambridge University Press, 2011), xxxii–xxxiv.

The KJV translators go on to say that they simply did the best with what they had available and placed other options in the margin. Modern Bible translations reflect advances in Hebrew scholarship, particularly our access to ancient languages related to Hebrew such as Ugaritic.

One more example to go.

In this psalm, David sees God’s power demonstrated in a storm.

Psa. 29:6  He maketh them also to skip like a calf; Lebanon and Sirion like a young unicorn.

Lebanon and Sirion (Mt. Hermon) are mountains. God’s power in the storm is so great, the very mountains are compared to skittish young animals: a calf and young unicorn. A young unicorn? Like this?

Is this fantastical creature what David had in mind when he wrote this psalm? Let’s start with the OED entry.

Used in Middle English versions of the Old Testament to render the Vulgate ūnicornis or rhīnocerōs (Greek μονόκερως) as translations of Hebrew re’em (also rēym), and retained in various later versions (but translated by ‘wild-ox’ in the Revised Bible).

Unfortunately, there are no unicorns on the earth or in the Bible. Modern scholarship has concluded the Hebrew term in question refers instead to the now-extinct wild ox, the bos primigenius. But for centuries, no one knew what to make of this creature. The translators of the Septuagint, the Greek translation of the Hebrew Old Testament, in their uncertainty, went with “one-horned [animal]” (467). In Greek that’s mono- (one) plus -keros (horn). Take that over into Latin, as in Jerome’s Vulgate, and you get uni- (one) -corn (horn). And later Bible translators, to include the KJV, followed suit (286).

The KJV translators probably did not have the same mental representation as my little girl did when they used the word unicorn, but modern readers won’t and can’t know this without a lot of nerdy homework. And unicorn appears not just once, but nine times in the KJV. That’s nine passages where because of a misleading term, readers will not correctly experience the author’s world.

How many nouns are there in the KJV to lead you astray? I don’t know. No one knows because it differs from reader to reader. Some people will figure out corn, target, and unicorn. But there are plenty more where those came from. There’s carriage, coast, college, confection, dam, furniture, matrix, munition, napkin, pricks, shambles, and turtle. There’s bunches of camels, dukes, fats, gin, sheriffs, and tablets. With words like these scattered throughout the sixty-six books, everyone ends up in something like a game of Minesweeper. These nouns are there, and the only way to avoid them is to scrutinize the history of meaning for every English word.

You can say these examples aren’t such a big deal. Who cares if it’s corn or grain? So what if Goliath has a target on his back or a javelin? Unicorn, wild ox, whatever—just so long as it’s some kind of animal, right?

This is the wrong approach. Your mental representation is a big deal. And Bible readers shouldn’t have to squeeze a turnip to get the correct mental representation of the author’s world. Anyone who takes the Bible seriously should want to experience the world the author intended. The KJV makes this a virtual impossibility in the particular contexts mentioned in this article.

And for anyone who wants to downplay the importance of these words, if they aren’t such a big deal, why are people fighting so hard to defend and keep these words? People who insist on the exclusive use of the King James Version will stumble over them without realizing it. And don’t we all want to understand what God said? Don’t we want our mental representations to match his as much as possible?