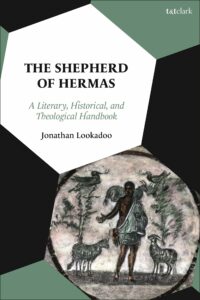 The Shepherd of Hermas: A Literary, Historical, and Theological Handbook

The Shepherd of Hermas is usually described as one of the more popular writings of early Christianity because of the large number of extant textual witnesses known today. Evidence of its inclusion alongside the New Testament in the Codex Sinaiticus, the frequency with which papyrus scraps with its contents have been rediscovered, the complete editions known in Latin and Ethiopic, and favorable mention in several writings of early Christians — these factors and more convince modern readers that the story of Hermas was commonly known and appreciated in the ancient world.

However, the story of Hermas told in the Shepherd of Hermas is long and complicated. And we really don’t have a complete version of the writing available in the language it was composed in, Greek. Our most complete manuscript, the Codex Athos, is missing the last leaf and thus the last seven chapters or so (out of 114 chapters total), outside of any snippets known from papyri finds (which aren’t much).

So the Shepherd of Hermas is a bit of a paradox: Supposedly well known and well regarded in antiquity, but confusing (and sometimes, I must confess, boring and frustrating) to modern readers. The story is so long and in some points complex that it is difficult to get one’s head around.

It is into this situation that Jonathon Lookadoo’s The Shepherd of Hermas: A Literary, Historical, and Theological Handbook enters. Importantly, it is a Handbook, not an introduction or even a study on select aspects of the writing. His handbook is specifically designed to help the new (or even moderately seasoned) reader of the Shepherd to come to grips with the whole of the text.

The first chapter is “An Overview of the Shepherd.” It is, quite literally, a vision-by-vision, mandate-by-mandate, similitude-by-similitude overview and summary of the entire work. For readers unfamiliar with the structure of the Shepherd, it begins as a series of visions received by Hermas that involve an elder woman; these shift to a series of commandments or mandates received from the “Shepherd,” an angel. The mandates, then, shift to a series of parables or similitudes, one of which (similitude nine) covers 32 chapters, or over 25% of the content of the entire work. Lookadoo ably summarizes each individual vision, mandate/commandment, and similitude/parable in 18 pages, providing a digested form that helps the reader to keep the major themes and progression of this long and windy text in mind. In other words, Lookadoo’s summaries help the reader get their head around the whole of the text.

Chapter two, “How Was the Shepherd Preserved?,” treats standard introductory questions involving the textual history and evidence of the Shepherd. Lookadoo identifies and describes the Greek sources, from the largest (Athos) to the smallest of fragments housed in the Oxyrhynchus and other papyrus collections. He details the major translations and their import, discussing the differences between the two major strains of Latin edition, the usefulness of the Ethiopic edition, and the idiosyncrasies of the Coptic editions with their apparent lack of witness to Visions 1-4. Then Lookadoo discusses the editions published, focusing on the major editions of the past 60 years.

Chapter three, “Who Read the Shepherd?,” delves into the reception history of the Shepherd. Lookadoo reviews citations and discussions from antiquity in two sections. The first involves authors writing from the second through fifth centuries and the second involves authors writing from the sixth through the fifteenth centuries. Irenaeus, Clement (of Alexandria), and Tertullian are all discussed with some detail, as is Origen. Other early writers that discuss the Shepherd are mentioned and the contexts of their citations is provided. One gets the sense that several writers of antiquity interacted with material from the Shepherd. This chapter ends with a discussion of the “authority” of the Shepherd among these early readers. How authoritative was the Shepherd? Lookadoo reviews the material and discusses which writers did (and which writers did not) view the Shepherd with authority, how this could be discerned, and whether it is of any import.

Chapter four, “Critical Questions for the Shepherd: What, to Whom, Where, When, and Who?,” digs into further questions of genre, audience, author, and setting. The larger portion of the discussion is focused on genre and examination of how the Shepherd is best understood as apocalypse. Problematically, the Shepherd does not contain the more well known components of apocalyptic literature, leading some to question whether it is really an apocalypse. Lookadoo’s discussion confronts these issues, interacts with the essential literature, and concludes that while it “may not be one of the prototypes selected for early Christian apocalypses, the text remains comfortably within the formal boundaries of the apocalyptic genre” (58).

Chapter five, “Fasting and the Vineyard: Exegeting Similitude 5,” provides an exegetical look at different aspects of Similitude 5. Lookadoo focuses on Fasting (Similitude 5.1.1-5.3.9), Christology (5.4.1-5.6.4a), Flesh and Spirit (5.6.4b-5.6.8); wrapping up by looking at Sim. 5.7 and the instruction the shepherd has for Hermas. It provides examples of looking at the text of the Shepherd in the context of the second century world. It is one bookend of the second part of the book. The other bookend is chapter twelve, “Spirit Language in Mandates 5-11: From Ancient Philosophy to Contemporary Theology.” While chapter five is focused on the world of the Shepherd, chapter twelve instead examines “spirit language” in the Shepherd through both modern and ancient strategies.

Chapter six, “The Characters in the Shepherd,” focuses on the roles played and relationships between each character. It is related to chapter eleven, “Metaphors and Imagery in the Shepherd,” which examines metaphors of the tower and household imagery in Vision 3 and Similitude 9. So not only are the major and minor characters in the writing examined, one of the primary settings (the tower) is also put under the microscope.

In its back matter, Lookadoo provides a well organized bibliography that runs for nearly 40 pages. This is followed by an author index, a reference index, and a subject index. The text uses footnotes throughout.

Lookadoo is to be commended for this organized look at the Shepherd of Hermas. Particularly for those unfamiliar with this writing, the section-by-section overview provided by chapter one will be useful for quickly coming to terms with the whole of the writing.

Some final notes: Hopefully a more reasonably priced paperback edition will be available from T&T Clark. Also, similarly structured handbooks on other writings of the Apostolic Fathers, particularly those which are longer (e.g. 1 Clement, Letters of Ignatius) would be welcomed, at least by this reviewer.

Special guest post written by Rick Brannan. T&T Clark provided Rick with a review copy of this book in exchange for an honest review.