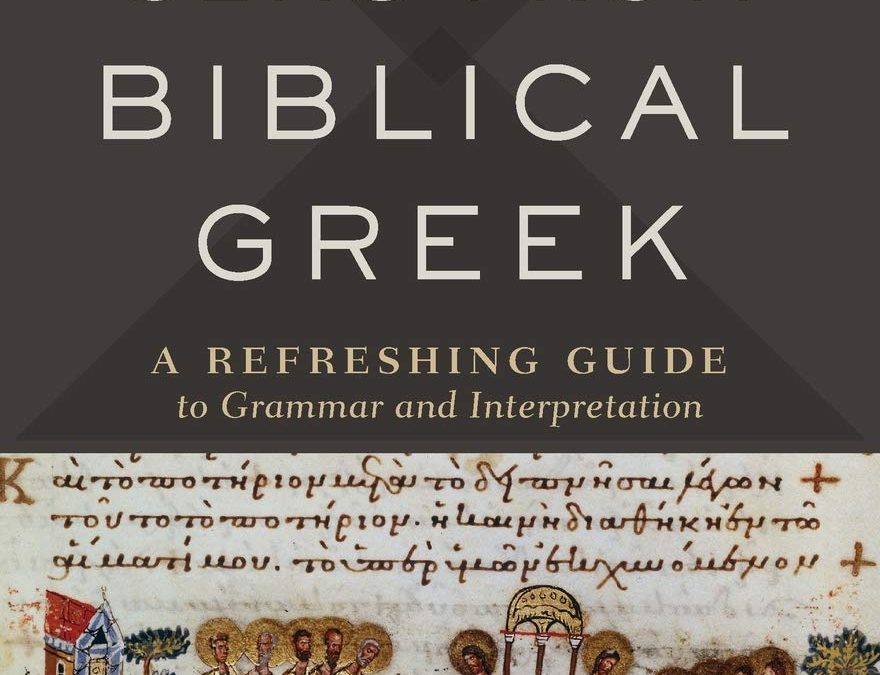 “Use it or lose it” doesn’t just apply to corporate budgets, Flexible Spending Accounts, and high school Spanish (¡Lo siento Señora LaRosa!). It’s the well-known reality of many with a few semesters of Greek under their belt. So here’s a book for anyone who wants to sharpen their biblical Greek skills. In Exegetical Gems from Biblical Greek: A Refreshing Guide to Grammar and Interpretation, Benjamin L. Merkle has provided a wonderful help for those working with the language of the New Testament. Students who aren’t sure what a periphrastic participle is will find an excellent summary and explanation. Pastors who aren’t sure what the significance of a periphrastic participle in a passage such as Matt. 18:18 is will find an excellent overview and detailed example.

Think of it as a hybrid of David Alan Black’s It’s Still Greek to Me: An Easy-to-Understand Guide to Intermediate Greek and the two recent Zondervan volumes of Devotions on the Greek New Testament edited by Paul N. Jackson. Every chapter focuses on a single aspect of syntax and applies it to one passage of Scripture to demonstrate some exegetical payoff in each of these “gems.” It’s easy to digest. It’s spiritually edifying. It’s interesting to read. As Merkle applies a single point of grammar to a single exegetical question in each of the thirty-five short chapters, readers will be encouraged to see the benefit of putting the language of the New Testament to work.

For an example of one of these exegetical gems, chapter seven deals with accusative case. And the accusative-bearing passage under consideration is Rom. 10:9 (“If you confess with your mouth that Jesus is Lord and believe in your heart that God raised him from the dead, you will be saved.”). The questions is: what exactly are we supposed to confess? Are we supposed to “confess that Jesus is Lord”? Or should we “confess Jesus as Lord”? Or maybe we’re supposed to “confess the Lord Jesus”? After posing the question, Merkle moves to grammar and defines the accusative case in this way: “The accusative case is considered the case of limitation since it often limits the action of a verb.” He then provides an overview of the different New Testament uses of the accusative before returning to his initial question dealing with Rom. 10:9. We learn that one of the keys to understanding Rom. 10:9 is that it contains a double accusative construction, where the verb (“confess”) takes two direct objects to complete its meaning. Out of the two accusatives in this verse, “Jesus” is the object and “Lord” is the complement. What all this ultimately means is that Paul is saying in Rom. 10:9 that we must confess that “Jesus is Lord.” If you’re Greek is rusty, this chapter is admittedly easier to understand after you’ve read the earlier chapter on the nominative case that explains a subject-predicate nominative construction. Some of the explanations understandably build on what has been discussed earlier on in the book. Merkle’s summary and explanation are helpful. This chapter, along with the others, do exactly what they’re intended to do—they refresh, teach, and encourage.

The bottom line is that it’s hard not to be enthusiastic about a book intended to keep folks in their Greek. A few of the exegetical gems are a bit old hat, such as the anarthrous nominative θεὸς in John 1:1 and the ἔχομεν vs. ἔχωμεν text-critical question in Rom 5:1, but every chapter is still engaging and informative. Sure, you can find scholarly treatments of all of these questions in good commentaries, but Merkle has provided a wonderful service by collecting them into a guide, where each one illustrates a different point of syntax. There are even some chapters addressing topics you might not expect to find in a book on grammar such as context, word studies, exegetical fallacies, discourse analysis, and diagramming. And something I only noticed when going back through this book is that its contents are arranged to follow the order of the recent reference grammar Going Deeper in with New Testament Greek. This is a volume I’ve also read, and one Benjamin Merkle also contributed too. It’s a good one to read if you enjoy reading about Greek. And if you’ve been blessed with a few semesters of Greek, hopefully, that includes you! So if you’re looking for a place to start, there’s none better than this. Because of its short chapters, this is a perfect book to leave on your desk so you can read one chapter each day. The challenge is to make sure you’re actually reading Greek, too, and not just about Greek. So why not do both? Try and make it a daily habit to read in Greek from the GNT or LXX and read about Greek using books such as this excellent guide.