Welcome to the Biblical Studies Carnival! Although this edition covers April 2022, the theme is Star Wars since May 4th (Star Wars Day) is almost upon us. If you’re tempted to complain that it’s light on links, you can enjoy the density of decent memes. Join Darth Vader, Peter Gentry, Claude Mariottini, Mike Vlach, Yoda, Jim West, Princess Leia, and more for a spectacular Star Wars Biblical Studies Carnival!

BBC News reported that a farmer in Gaza found a 4,500-year-old statue of a Canaanite goddess.

I don’t think I knew that Mike Vlach even had a blog until now. But he does! And he’s been posting off and on for years. Here’s a new post of his called “Genesis 1 and the Roots of Premillennialism.”

Claude Mariottini lists books mentioned in the OT that have not survived in his post, Books I Would Like to Read. He also present a rebuttal to a New York Times essay with his own essay entitled “Killing the God of Passover.”

Exhibit A: Evidence that Star Wars is biblical

Over at The Olive Branch, Jim Eisenbraun interacts with another author’s treatment of the Naaman story in 2 Kings 5.

We may not have a clue where Noah’s Ark is, but archaeologists found something kind of close to Utnapishtim’s boat! Find out more from Nathan Steinmeyer over at Bible History Daily. 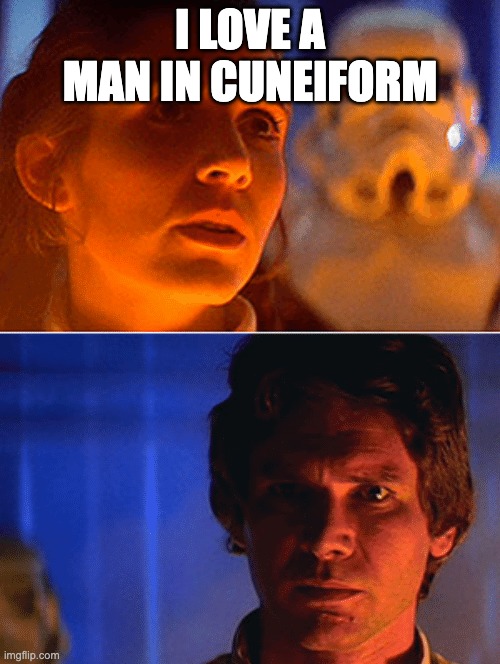 Exhibit B: Evidence that Star Wars is biblical.

Philip Boyes shared The Social Context of Writing in Ancient Ugarit over at asor.org. Hedwig Schmalzgruber also shared When ‘Dumb’ Beasts Raise Their Voices: Speaking Animals in Ancient Graeco-Roman and Near Eastern Literature. 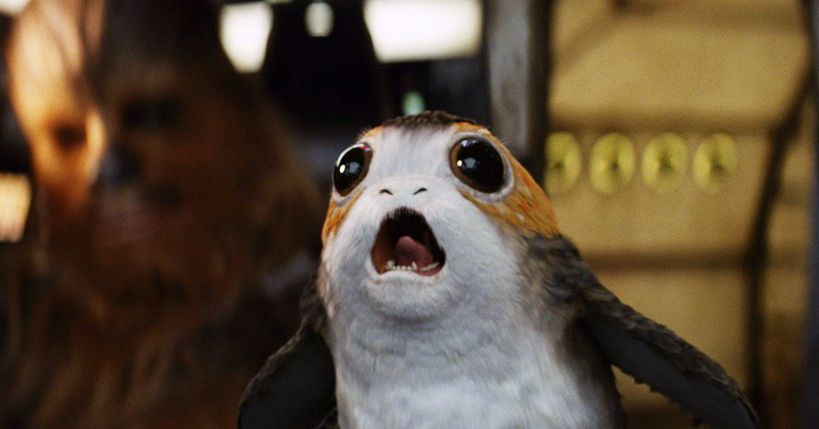 Tommy Wasserman reports the happy news of a loose leaf now reunited with its lectionary. You should read Donation of a Manuscript Leaf (L1663) to the Goodspeed Collection.

Phil Long wrote an insightful post noting a “remarkable parallel” between Jesus’ quotation of Psalm 118:22 and the Aramaic Targum. Check out Who Is the Stone the Builders Rejected? Matthew 21:40–45. 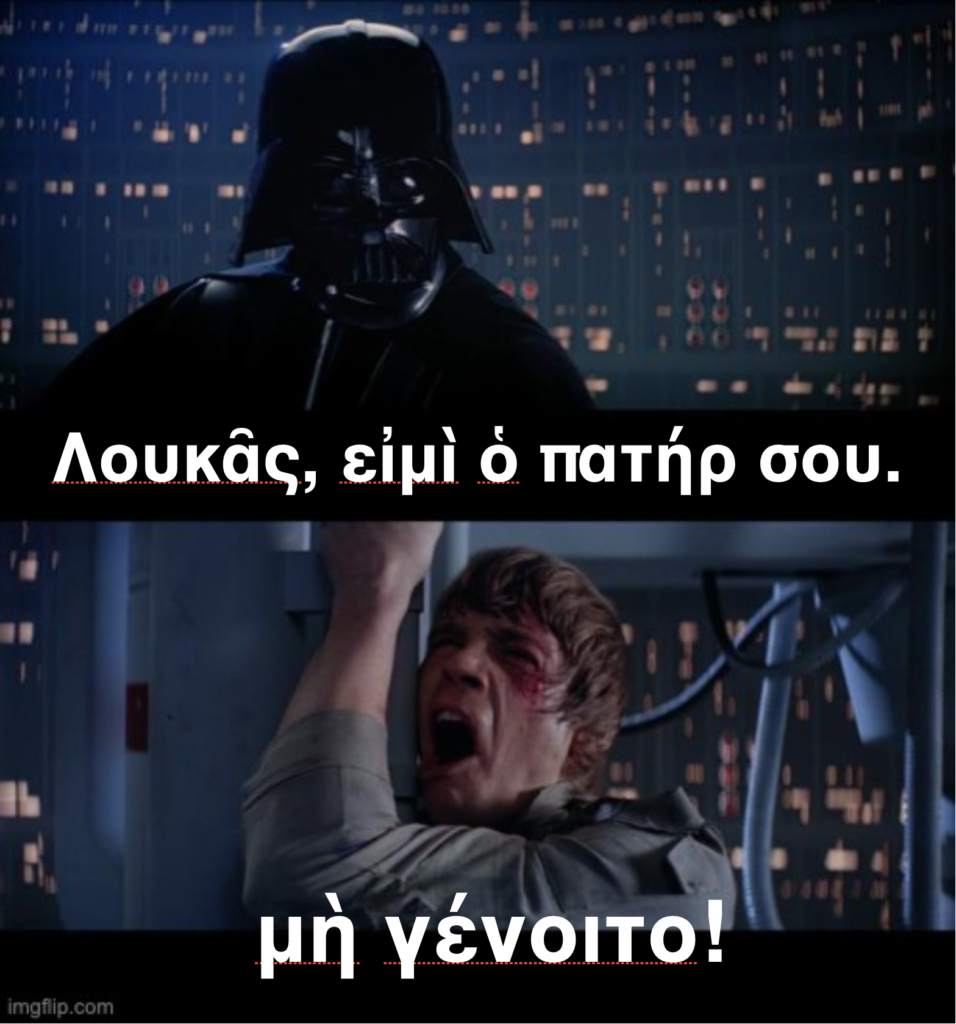 Timothy Mitchell, the Textual Mechanic, looked at what Ignatius and Polycarp thought about Pauline authorship of 1 and 2 Timothy. You can read it here. He also did an interview on textual criticism, inspiration, and inerrancy that you can watch here.
Steve Runge tells us why we should slow down whenever we run into a conditional clause. Check out Placement is Everything; Greek Conditional Clauses at the Logos Academic Blog.
If you have a pile of Imperial Credits burning a hole in your pocket, John A. L. Lee has a new book coming out with Peeters called Collected Essays on the Greek Bible and Greek Lexicography. (HT: Andrew Keenan)

In other book news, Rick Brannan’s recent book, Fragments of Christianity, is now available on Logos! (Or, you can order it in paperback here.) Will Ross shared how he and Steve Runge have a book on Greek prepositions coming out in November called Postclassical Greek Prepositions and Conceptual Metaphor: Cognitive Semantic Analysis and Biblical Interpretation. Find out more here. 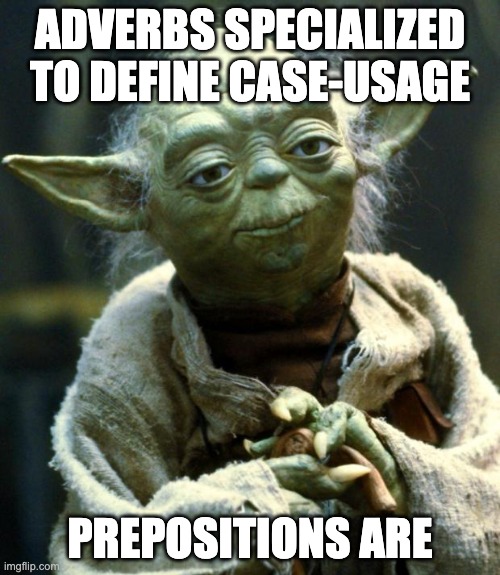 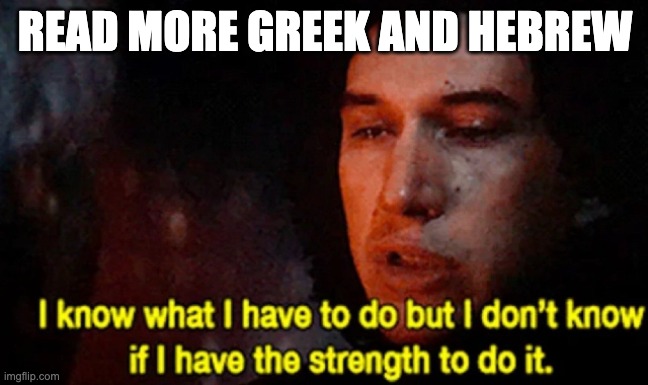 Rabbi Tuly Weisz, writing for the Jerusalem Post, makes his case for a third temple.

Mark Ward makes videos on Bible translation. This one—part of a series on the Passion Translation—came out March 31. Technically not in April, but I wanted to make this meme below. 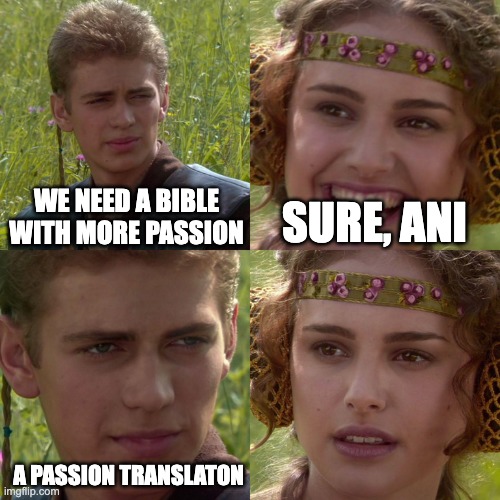 Speaking of Bible translations, Ben Witherington posted Recently Revised Translations (that do not have the name King James in their titles).

Daniel Silliman from Christianity Today also wrote on the New NRSV in this article: Levites, Whores, and Demoniacs: Here’s How the New NRSV Has Changed.

Thanks for visiting this edition of the Biblical Studies Carnival! If you are a blogger, please consider hosting one of these to boost your traffic, share what you like, and have some fun. Phil Long (@plong42 on Twitter) is looking for bloggers to host upcoming carnivals. There’s only one more volunteer slotted for this year. Don’t let the Biblical Studies Carnival die like Greedo. (Han shot first!) Give hosting a try. You can email him at plong42@gmail.com.

Bob Macdonald will host Carnival #195 (May 2022). His website is meafar.blogspot.com. Consider sending him posts and articles you read or write this month, and maybe he’ll include them.

Thanks for reading. May your original texts and lexicons always be with you!