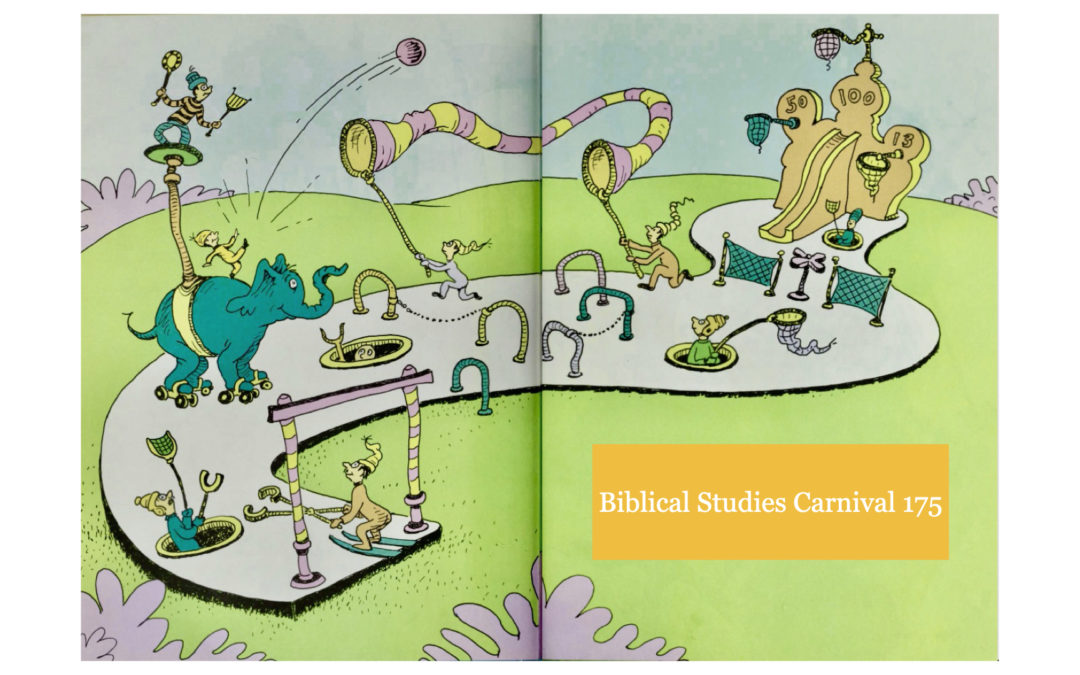 September is over, biblio-blogging’s still alive.
Let’s celebrate with Carnival Number One Seventy-Five.

It was September ‘91 that Dr. Suess died,
In his memory, this rhyming carnival I tried.

Have a ball. Scroll down. Scroll up.
Enjoy a blogging assortment in one handy rollup.

A cavity was discovered that could’ve been real neat,
Guess we’ll never know since it’s been filled with concrete.
A Tantalizing Discovery on the Temple Mount
Temple Mount Sifting Project

You can read about archaeology in this fascinating description—
how they discovered Jerusalem’s earliest Proto-Canaanite inscription
Precursor to Paleo-Hebrew Script Discovered in Jerusalem
biblicalarchaeology.org, Robin Ngo

Lebanon has a find that will no doubt impress.
They found what’s now their oldest wine press.
2,600-year-old Phoenician winery discovered on Lebanese coast
The Jerusalem Post, Zachary Keyser

Tim Mitchell has an article on textual corruption,
You can read it in December without pecuniary disruption.
Exposing Textual Corruption at JSNT
The Textual Mechanic, Tim Mitchell

Do you feel like the field of female Bible scholars is barren?
Laura Martin recommends a 1 Peter commentary by Karen (Jobes).
Reading through a Bible commentary…practical insight from First Peter
Enough Light, Laura Martin

Curious about textual criticism and not sure where to start?
You should try Wallace, Jongkind, Metzger and Bart (Ehrman).
Answering a Question I Get All the Time: The Places to Start in Studying New Testament Textual Criticism
By Faith We Understand, Mark Ward

Speaking of Ehrman, learn how he got his position.
This one’s not paywalled? It’s free admission?
The Tragedy Behind My Teaching Position
The Bart Ehrman Blog: The History & Literature of Early Christianity

Were lepers really shunned? Were they unclean?
Of course! Contrasting Jesus with Pharisees sets the scene.
Were Lepers Considered Unclean in the Bible? Matthew 8:1–2
Reading Acts, Phil Long

James might have to save every Bible number for heaven,
But he’s noticed something cool about Judges and eleven!
Counting with God: What Do Numbers in the Bible Really Mean?
Desiring God, James Bejon

Make use of the Masorah. It’s something you should do!
This excellent post will help a ton. But you’ll need BHQ!
Introduction to the Masorah | The Masorah of Biblia Hebraica Quinta (BHQ)
Ancient Jew Review, David Marcus

What happens when King James and Bob collate?
Learn an important lesson from Psalm 78.
Set up your folly in God (Psalm 78)
Dust, Bob MacDonald

Let’s not neglect to give Gary a nod,
He offers a theory to ID Nimrod.
Who Is Nimrod? An Answer
Bible, Myth, and History, Gary Greenberg

A critical scholar gives way too much credit
To a hypothetical scribe and a creative edit.
The Binding of Isaac, a Sacred Legend for the Jerusalem Temple
TheTorah.com, Romi Arav

Joseph’s coat. Have we gotten it wrong?
Then what about that Tim Rice/Lloyd Webber song?
What Color was Joseph’s Many-Colored Coat?
PeterGoeman.com

Jim and Donald—Look, Look,
They have a contract to write a book!
Exciting News: We Have a New Book in the Works
Zwinglius Redivivus, Jim West

Can you trust the gospel if you can’t trust the exodus?
I wouldn’t trust it. But see what Alex says about this.
Does the theology of the Gospel depend on the history of the Exodus?
Scribes of the Kingdom, Alex Finkelson

Another Alex loves ethics, although he’s an engineer,
His enthusiasm should inspire you and bring you some cheer.
My Winding Journey into Ethics
What the Gospel Demands, Alex Strasser

Want to knock your blog’s analytics out of the park?
Here’s a tip. Try titling posts with a question mark.
What Kind of Blog Post Titles Get Read Most?
http://www.stephenjbedard.com, Stephen Bedard

The Bible is literature, but it’s also Holy Writ,
That means it’s theological, and not merely lit.
Is Scripture Literature?
1517.org, Caleb Keith

Thanks for reading. Hope the carnival’s been fun.
If you have a blog. You should try one!

A carnival a month is the Internet’s will.
Help keep the machine going and contact Phil.

There are only volunteers for the next coming two.
And every month we say, “We need you.”

The first draft of this carnival was so so and ho hum.
Thanks for all the suggestions, Joey McCol-lum.