Battle of the Lexicons: Septuagint Edition 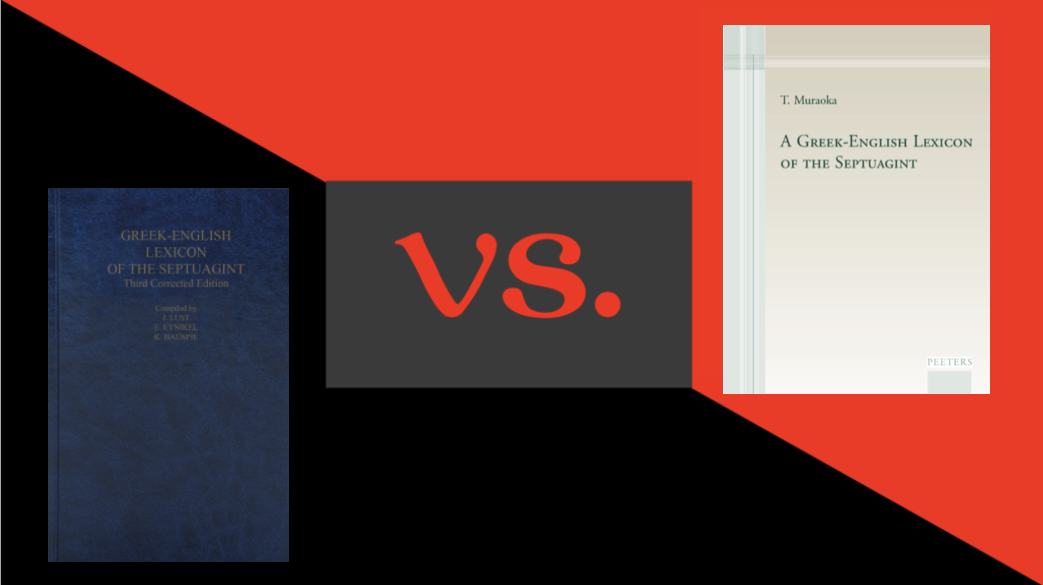 It’s that time again—time for another battle of the lexicons! There I was reading about David dancing before the Lord over the return of the ark, and I gave the Septuagint (LXX) a gander. And, lo and behold, there’s something a little different going on there. And it’s this different little something that I would like to take a look at by comparing how the two standard lexicons covering the Septuagint treat several words. I’m talking about Greek-English Lexicon of the Septuagint by Lust, Eynikel, and Hauspie (LEH) and A Greek-English Lexicon of the Septuagint by Takamitsu Muraoka (GELS). I didn’t go looking for this battle. This battle found me. So without further ado, I give you: The Battle of the LXX-icons!

Our two contenders are rough contemporaries of one another. The interested reader is encouraged to see Bernard Taylor’s review of the former here and John A. L. Lee’s excellent review of the latter here. It is important to note the philosophical distinction between the two, which is well documented. I’ll quote a brief explanation from Jobes and Silva.

Takamitsu Muraoka, on the one hand, argues that a LXX lexicon should give the meaning that would have been understood by a Greek reader with no knowledge of the Hebrew text. On the other hand, Johan Lust takes the position that a LXX lexicon should seek to identify the meaning intended by the translator, who obviously did have the Hebrew text before him and chose his Greek words under the influence of the Hebrew reading (292).

This is a complex debate, and while I might have my own opinions, smarter people than me disagree. But perhaps we will see this dividing philosophical difference manifest itself in this comparison. Let’s proceed to looking at our text and how two different English translations have rendered this passage.

And Dauid struck upon tuned instruments before the Lord (NETS)

And David was playing on tuned instruments before the Lord (LES)

If you consult the MT or an English Bible translation, you will quickly notice the difference I mentioned in the introduction. David is no longer dancing before the Lord. He’s playing a musical instrument. But let’s consider how these two lexicons treat three of these words that describe what David is doing.

To the right of the head word, there is a string of data. The “V” is the morphological data, in this case, a verb. The six numbers provide statistical information on how many times this lemma appears in the LXX (Torah, Early Prophets and 1 and 2 Chronicles, Later Prophets, Writings sans 1 and 2 Chronicles, those books of the Greek Bible which are not found in the Masoretic Text, and a grand total respectively). Following a list of references, we find a translation equivalent for each of these usages. The editors suggest that in the context of our chosen passage, ἀνακρούω is best rendered “to strike up” or “to touch the strings” on a dative object. That something being the locative dative of ὀργάνοις, which is the next term we’re going to scrutinize.

The symbol ∫ following ἀνακρούω indicates that “all the passages in which the headword occurs in the corpus are mentioned in the entry” (XIII). Muraoka differs by distinguishing two distinct senses. This usage is listed under the first where we find not only a gloss but a definition. According to this, David was “beginning a tune first,” which could be translated as “striking up” followed by however we determine our remaining words should be translated.

Am I alone in feeling like an etymological note (ἀνά, κρούω) or just directions to “cf. κρούω (to strike)” would have been nice to include? LEH is a bit haphazard in its organization. GELS tries to distinguish between two different senses, but I wonder if the difference between the two is a question of Aktionsart. Doesn’t striking up a tune describe an ingressive action of expressing musically? On the plus side, GELS shines the brightest due to offering actual definitions in addition to glosses. Round one has to go to GELS. Time for round two!

The plus sign after the lemme signifies this word also appears in the NT. And while this word can refer to a large handful of entities, there is no doubt that musical instrument is the correct referent for this passage. LEH offers a translation with a suggestion that the LXX translators read בְּכְּלִי, which could be translated “with instruments, instead of בְּכָל, which we would translate as “with all” (his might). This helps explain why the LXX likely differs from the MT in this passage.

So far, I would say Muraoka handles his lexicon making in a tidier manner. Instead of dropping a bunch of glosses on the pages, he goes to the effort of categorizing by senses. Instrument covers all those things that aren’t body parts. And while 2K 6.14 isn’t listed, it’s clear from the context that David is striking up an instrument, and a musical one at that. A musical instrument is clearly in view.

I like how LEH explains what the translators may have been thinking. But when it comes to the lexical task, GELS stands out on this entry with its arrangement of senses. The senses were questionable for ἀνακρούω, but in this case, it works. I know it makes the final conclusion predictable, but the win for round two has to go to GELS. Stick around for round three!

Here’s another verb, and one that in our text is a perfect passive participle. We’re directed to translate the passive as to be suited/adapted to and there’s a suggested translation of “on well-tuned instruments” for the same phrase found in 2 Sam. 6:5.

Muraoka lists the forms this verb takes in the LXX and includes the perfect passive participle. He doesn’t include our reference under any of his senses, but we do find ὄργανον glossed as a musical instrument (albeit the tongue) under the second sense of to set in order with the gloss to tune. Because we’re working in a musical context here, to tune seems like a safe bet.

LEH simplifies things by providing translation equivalents for active and passive voice. GELS again seems to set itself apart with its distinct senses. LEH gives us a suggested translation for a musical context only indirectly, while GELS gives it to us outright. Again, I prefer how GELS handles this one. The win for round three and the entire match go to GELS.

Now that we’ve combed through both lexicons, if we allow each to guide us on its own, our translations might look like this.

LEH: And David was touching the strings on well-tuned instruments

GELS: And David was striking up a tune on tuned instruments

The two resources have their similarities. Both are concise compared to something like LSJ or BrillDAG. Neither includes any evidence or bibliographic citations. Overall, GELS is superior in my estimation because it gives distinct senses and definitions. In hindsight, by examining a phrase not found in the MT, I made it impossible to assess whether LEH has a propensity to tease out meanings from underlying Hebrew terms. We can pretend I did this for some astute methodological reason. And you can compare how these two resources handle these words and see which one you feel performed the best. Comment with your own opinions and feel free to offer suggestions for future matchups!