Thoughts on Spirits in Bondage by C. S. Lewis 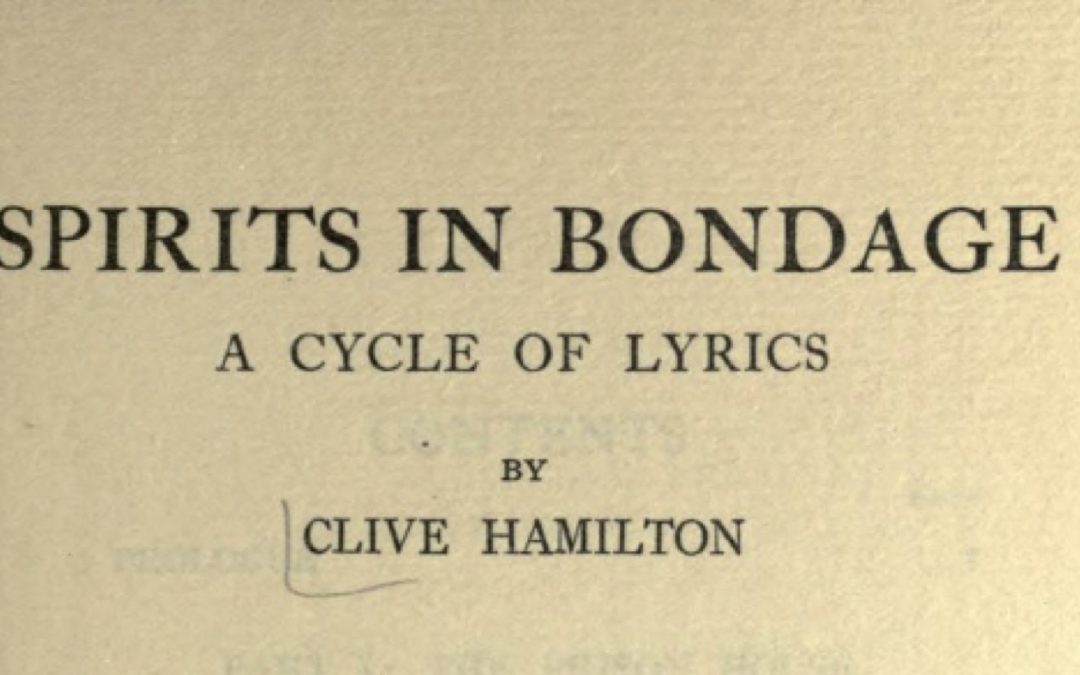 —C.S. Lewis, Spirits in Bondage: A Cycle of Lyrics

I’ve been slowly working my way through Letters of C. S. Lewis and in these letters, Lewis discusses his first book, Spirits in Bondage: A Cycle of Lyrics. He wrote to his father in 1918 about how he had amused himself over the years by writing poems, and William Heinemann had agreed to publish them in book form. This book of verse, Spirits in Bondage, was published in 1919 under the pseudonym Clive Hamilton. Lewis didn’t want to use his real name out of fear that writing a book of poetry would affect how his fellow soldiers might view him (105–109). As far as I can tell, his book sold like cold cakes and received little notice. Even over the past 100 years, it seems to have received little notice. So my curiosity was piqued when I saw Lexham Press is republishing this inaugural C.S. Lewis work. This isn’t a review of the Lexham edition, although I would be interested to read the introduction by Karen Swallow Prior. These are my thoughts on the original 1919 William Heinemann edition.

Before considering whether this is a book worth reading, it might be helpful to consider why it is we read C. S. Lewis. Why do we? For one, he writes with great skill. And for another, he can address spiritual topics in a way that deeply resonates with Christians. That being the case, why would we want to read something written by a young, unsaved C. S. Lewis— and poetry at that? Poetry where faeries are a recurring feature along with unfamiliar mythological and literary allusions to Cuchulain, Iseult, Despoina, Nereid, and Bradamant.

Ecclesiastes masterfully expresses the meaninglessness of life without God. Because Lewis has no relationship with God at this point in his life, he is fully experiencing the meaningless of life. This comes across in many of his poems in this volume, but I’ll offer just one as an example. Take these opening lines from “In Prison,”

I cried out for the pain of man,
I cried out for my bitter wrath
Against the hopeless life that ran
For ever in a circling path
From death to death since all began;

Pain, anger, hopelessness, and futility. It’s all there. And from Lewis’s point of view, the situation is hopeless. Why should he feel anything different? This is the expected worldview from someone who has not put their faith in the God of the Bible. And that’s where Lewis’s theology comes into the picture. And you only have to look across the page to his next poem, “De Profundis,” to get an idea of how he views God.

Come let us curse our Master ere we die,
For all our hopes in endless ruin lie.
The good is dead. Let us curse God most High.

You mean this is the same man who wrote Mere Christianity and The Chronicles of Narnia? Indeed. And this is where the value of these poems comes out. It gives us the before picture of a before and after comparison of Lewis with and without believing the gospel. Christians can be too quick to forget what their life was like before Christ. Our hearts can become unfeeling towards the hopelessness of the lost, even the antagonism the lost can feel towards God. Reading a book such as this where a lost man reflects on his feelings towards God should warm our hearts and sympathies towards those without Christ. Consider Spirits in Bondage to be a sort of grammar that can improve your ability to engage unbelievers about their feelings towards God most High.

If you’re interested in giving it a try, Spirits in Bondage is a short book. You can read it for free at archive.org. If you want to check out a sampling, my top three poems are “In Praise of Solid People,”  “The Ass” (it’s about a donkey), and “Death in Battle.” I’m no poetry expert, but I enjoyed a richer experience by reading aloud and then rereading some of the poems to better understand them.