Book Review: Preaching for a Verdict 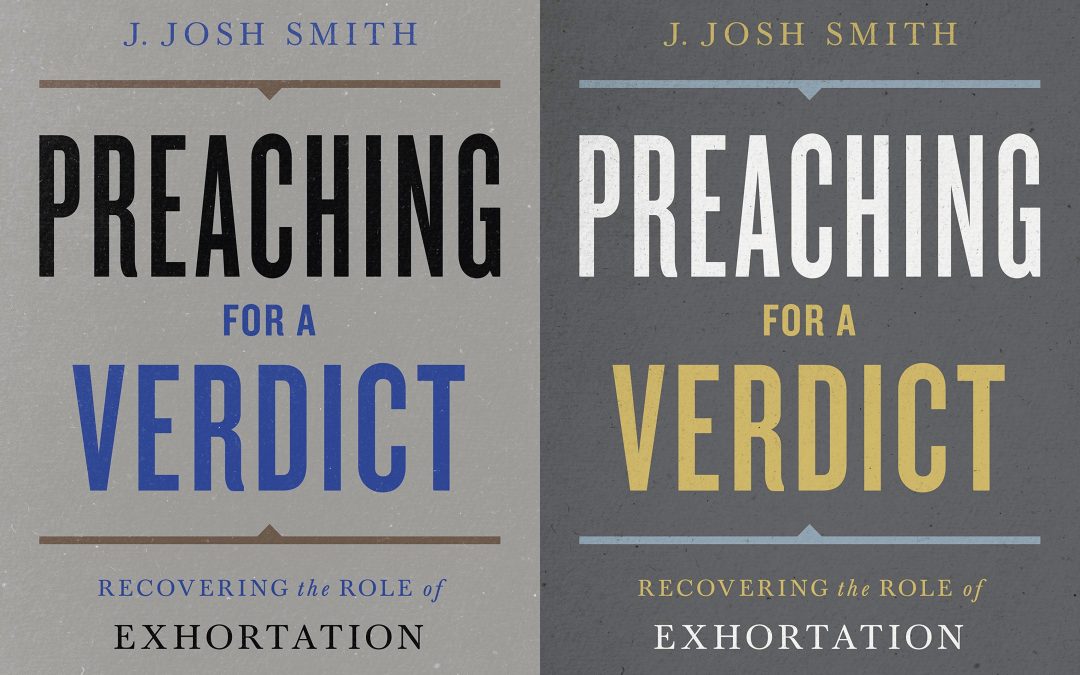 After reading Preaching for a Verdict: Recovering the Role of Exhortation by J. Josh Smith, I have a new criterion for evaluating preaching. Is the preacher urging his hearers to action? On Sunday, I listened to two sermons. This morning, I read over my manuscript for the next sermon I intend to preach. Is there a call to action? Based on my observations, not so much. What I found was plenty of describing. Preachers describe what the text means in their explanations. Preachers describe what the text looks like in their illustrations. And preachers describe what we should do in their applications. But more often than not, the sermon stops there. It concludes with application. But the preacher never told his congregation to do the application. He never persuaded. He never exerted any pressure as to why they should actually do it. Instead, there are a bunch of “You shoulds” and “May we’s” and “Would you’s?” and “I trust’s.” And what’s found lacking are textually-based imperatives. I’m thankful for the corrective Preaching for a Verdict offers. It’s a Johnny One Note kind of book— preaching requires exhortation—that’s it. But this is a note that needs taking. Here’s a summary of the contents and my evaluation.

Chapter 1. What Happened to Exhortation?

The standard model of explanation, illustration, application is incomplete. The hearer has a responsibility to respond. Preaching, then, must include both exposition and exhortation. What is exhortation? It’s “persuading the listener to respond to the call of the text through proclaiming the point of the text, in the voice of the text” (19). Application alone isn’t enough. It’s possible to apply without exhorting. And we’ve done ourselves a disservice by treating exhortation as a synonym for application. They’re not the same, and Augustine, Luther, Calvin, and the Puritans all knew it. They applied and exhorted.

Chapter 2. A Theological Foundation for Exhortation

Smith says exhortation is intrinsic to the Bible. Because God has spoken for a purpose, the preacher, speaking for God, must speak for that same purpose. As to why God has spoken, His purpose includes self-revelation, relationship, sanctification, and response. God’s Word exhorts; therefore, God’s preachers must exhort. And the Word of God demands to be the basis for exhortation. It’s inspired, authoritative, sufficient, and powerful.

Chapter 3. The Biblical Foundation for Exhortation

Looking at the grammar of Hebrew and Greek imperatives and lexical analysis, Smith continues to build his case for exhortation. He examines occurrences of the word παρακαλέω (Gr. “to exhort”) as it shows up in the ministries of John the Baptist, Peter, and Barnabas to build a case for the importance of exhortation in preaching.

Chapter 4. Exhortation in the Preaching of the Old Testament

If you survey preaching in the Old Testament, you can’t avoid the conclusion that it included exhortation.  Moses is an exemplary model. There’s also Joshua, Ezra, examples in Psalms and Proverbs, Amos, Ezekiel, and Isaiah.

Chapter 5. Exhortation in the Preaching of the New Testament

Here we get to the nuts and bolts of putting exhortation into practice. The biblical text drives exhortation. The preacher must identify the point of the passage, how the passage delivers the point, and the passage’s call to action. And then, based on all this, he must determine what he must persuade his hearers to do.

Exhortation requires hard work, the work of the Holy Spirit, and authoritative delivery.

I’m sold. I won’t think of sermons—my own or someone else’s— the same after reading this book. Smith makes his case in a simple, straightforward, and predictable manner. When it comes to quibbles, at times, the book feels more like a research paper than a book. If I had to guess, I might suppose this was originally a research project for a doctor of ministry program or something along those lines. At one point, Smith even refers to what he is writing as “this paper” (99). The “research paper” feel comes from the occasional barrage of lengthy block quotations (e.g., 45–49), and there’s one page that contains way too much data (63). Other than that, I just wish the author could have spent more time on the practical steps for doing exhortation. The four steps only cover pages 97–106. I appreciate how he spends so much time building a case for exhortation, and the chapter of sermon examples is okay, but I would have really liked more instruction on how to be an exhorter in the pulpit. You convinced me my preaching needs exhortation, now tell me more about how I can do it! It’s still a valuable book. Returning to the positives, Jones has a high view of Scripture. He upholds and champions inerrancy, inspiration, authority, and sufficiency. And it was nice to see some quotes from guys you don’t see quoted as much these days—writers and preachers from a previous generation like D. Edmond Hiebert, Robert Lightner, and Vance Havner.

A seminary professor of mine once compared preaching to driving a nail. It’s the preacher’s job to keep hammering away at his main point as you would with a single nail, driving it home. In a similar fashion, J. Josh Smith hammers away at a single nail—exhortation. And he drives his point home. If you’re a preacher, you must exhort! I came away exhorted to exhort. And there is probably no better form of praise for this book than to say, from here on out, I’m adding sections dedicated to exhortation to my sermon outlines. Sermons need more exhortation. Preaching for a Verdict will convince you and equip you to better devote yourself to this biblical mandate (cf. 1 Tim 4:13).

Thanks to B&H Academic for providing me with a review copy of this book. This did not influence my thoughts regarding the work.