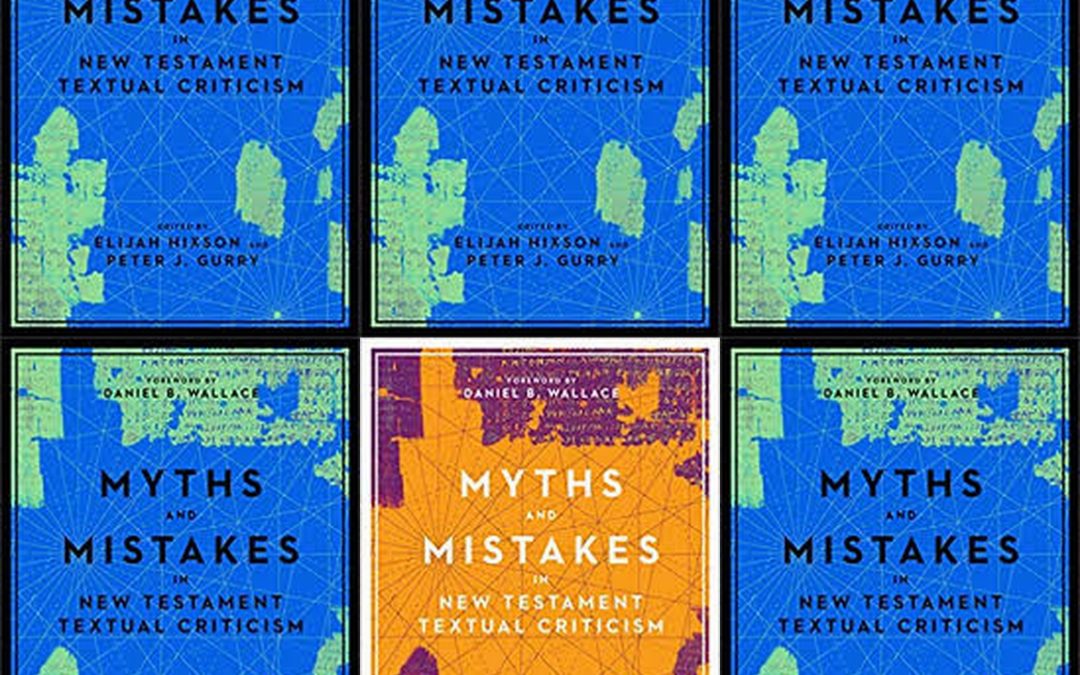 To introduce a book review with another book, when Carlo Levi arrives in a remote Italian town, as recounted in Christ Stopped at Eboli, he finds dismal provisions for the medical care of the townspeople. Although there are two local doctors, neither has made any effort to keep up with the advances of modern medicine. So Levi, with his more up-to-date medical training, steps in to provide the people with better healthcare. I will say that Elijah Hixson and Peter Gurry have performed a similar service by editing this needed volume: Myths and Mistakes in New Testament Textual Criticism. They and their accompanying host of enlisted contributors address the outdated, wrong, and often misleading information frequently cited by apologists, popular-level, and even academic Christian writers. These scholars have stepped in to do for our understanding of textual criticism what Carolo Levi did for the healthcare of his fellow Italians. But instead of bad medicine, the shoddy state of affairs they address concerns manuscripts, copying, translation, citation, and canonization. But don’t assume this book is a mere compendium of iconoclasm penned by young upstarts. The contributors to this volume are zealous to identify error because they have a deep concern for the truth. And after dispelling myths, they demonstrate how the truth alone is capable of providing a strong defense. In reality, if we continue to propagate errors, we’re doing more of a disservice to the faith than a defense.

Myths and Mistakes covers a lot of ground. There are fifteen chapters in all, fourteen of which each address a specific category of myths. If you pick up a copy of this book, you’ll find each chapter concludes with a few handy bullet points that summarize the key takeaways. But as I was working my way through the book, I made a few notes to try and sum up my impressions of each chapter. Here’s what I came up with.

Christians should be accurate and honest with their apologetic arguments. Using wrong information only weakens our cause.

2. MYTHS ABOUT AUTOGRAPHS: WHAT THEY WERE AND HOW LONG THEY MAY HAVE SURVIVED

Research into the publication of autographs and the distribution of copies supports a stable textual transmission.

3. MATH MYTHS: HOW MANY MANUSCRIPTS WE HAVE AND WHY MORE ISN’T ALWAYS BETTER

The numbers used to compare New Testament manuscripts with classical works such as Caesar’s Gaelic Wars, Plato, and Homer are wrong. We still have lots of copies of the New Testament, but our better arguments for reliability come from textual criticism, not the sheer number of manuscripts.

5. DATING MYTHS, PART ONE: HOW WE DETERMINE THE AGES OF MANUSCRIPTS

Dating manuscripts isn’t easy or foolproof. You can only be so specific, so it would be best to use a broader date range of fifty to one hundred years.

7. MYTHS ABOUT COPYISTS: THE SCRIBES WHO COPIED OUR EARLIEST MANUSCRIPTS

Scribes were actually pretty good at their job, giving us good reason to be confident in the accurate transmission of the text.

8. MYTHS ABOUT COPYING: THE MISTAKES AND CORRECTIONS SCRIBES MADE

Scribes still made mistakes. There really isn’t a lot of evidence they made theologically-motivated changes. And they often did their best to correct their work.

9. MYTHS ABOUT TRANSMISSION: THE TEXT OF PHILEMON FROM BEGINNING TO END

Variants have value, even when they are not determined to be part of the initial text.

10. MYTHS ABOUT VARIANTS: WHY MOST VARIANTS ARE INSIGNIFICANT AND WHY SOME CAN’T BE IGNORED

Most variants don’t matter all that much, but some do.

11. MYTHS ABOUT ORTHODOX CORRUPTION: WERE SCRIBES INFLUENCED BY THEOLOGY, AND HOW CAN WE TELL?

There is variation in the text. Theologically motivated variation is undoubtedly possible. Yet it’s often tough to know for sure, and it does not undermine the stability of our well-attested text.

12. MYTHS ABOUT PATRISTICS: WHAT THE CHURCH FATHERS THOUGHT ABOUT TEXTUAL VARIATION

Don’t even think about trying to reconstruct the New Testament with patristic writings. They’re valuable for giving us a window into transmission history, though.

13. MYTHS ABOUT CANON: WHAT THE CODEX CAN AND CAN’T TELL US

Codex does not determine or reflect canon. Canon is understood through the canon lists. The codex can be interpreted in light of the canon lists too.

14. MYTHS ABOUT EARLY TRANSLATIONS: THEIR NUMBER, IMPORTANCE, AND LIMITATIONS

Early translations can be useful for noting the absence or presence of large variation units, not those of a smaller scale that can’t be accurately detected in a translation. Our number of early translation manuscripts is smaller than traditionally stated too.

Textual criticism affects those reading the Scriptures in translation differently than you might expect. (Bonus points for using the word indubitably.)

Those are the key takeaways I came away with for each chapter. Overall, I would say the major accomplishment of this book is defending the reliability of the New Testament. Sure, there are lots of manuscripts (less than Christians might think), but still, there are a lot. And there are lots of variants. But for whatever myth is being tackled in a particular chapter, there is never a conclusion that brings the reliability of Scripture into question. Quite the opposite.

Something else mentioned in this book that often gets lost on moderns like us is that what we call manuscripts were people’s Bibles. These were the Scriptures which God, in His providence, gave them to read. And there’s this great quote in the book from Stephen Neill, who said, “Indeed, I think it is no exaggeration to say that the very worst Greek manuscript now in existence…contains enough of the Gospel in unadulterated form to lead the reader into the way of salvation.” Amen.

When it comes to negatives, I don’t have a whole lot to say. The only typo I noticed was in footnote 13 on page 114, where Kirsopp Lake is introduced with the definite article. (Not that he doesn’t deserve it.) Perhaps there could have been a bit more deconfliction to avoid some of the overlap in covering individual textual variants. The repetition of the infamous Mark 1:1 variant in several chapters is a bit much. And perhaps a final conclusion would have been a nice way to end things. The final chapter on modern translations kind of serves as a way to tie things together by considering the end-user of textual criticism, but I found the ending abrupt. And the chapter felt a bit out of place in that it was aimed more at the textual critic than the apologist.

In conclusion, this isn’t a book just for specialists, although they would enjoy it. It’s a book that a general reader could work through and benefit from. But ultimately, I hope the church will benefit from a trickle-down effect as this book brings to light just how outdated and often plain wrong much of the information bandied about actually is. The commonly used statistics and arguments are often incorrect and misleading. And those writing material defending the Bible, continue to rehash this bad information they are simply taking from sources they trust. Hopefully, Myths and Mistakes will serve as a guide to correct and update these errors. Perhaps editors at Christian publishing houses will read this book too so they can quash the problems being perpetuated in print that this book brings to light.