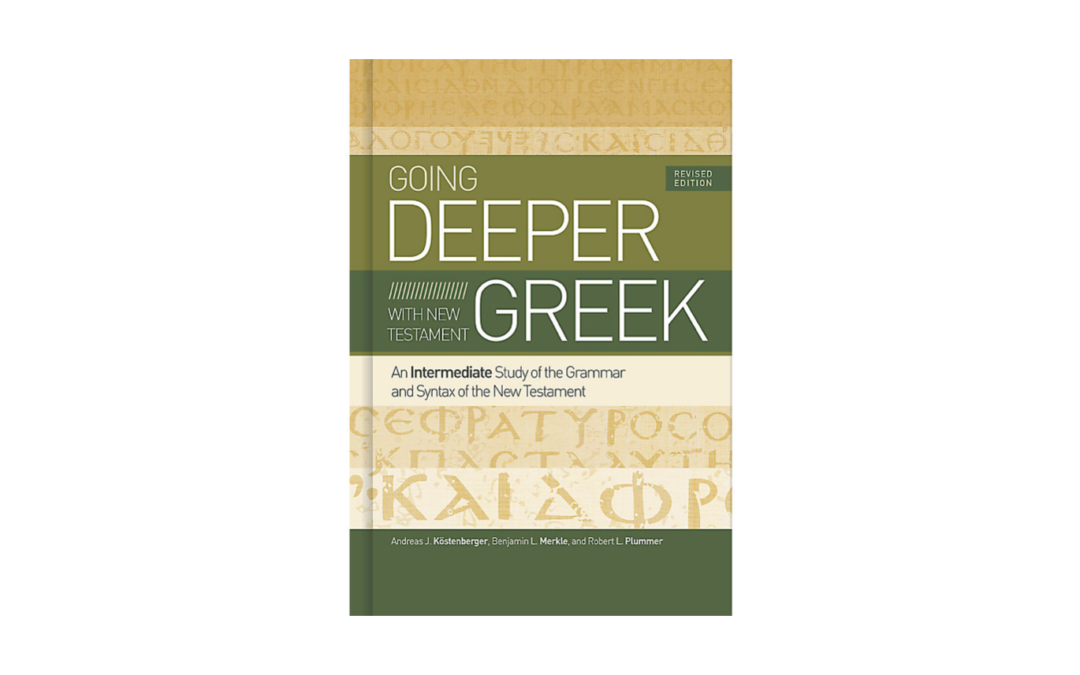 I purchased and read the original edition of Going Deeper with New Testament Greek by Köstenberger, Merkle, and Plummer back in August 2016 when it first came out. So it was somewhat of a surprise to see B&H Academic releasing a revised edition of this intermediate Greek grammar so soon. My curiosity was piqued to know how this revision differs from the original release. I’ll note the differences as part of my review.

Fifteen chapters cover everything you would expect and a bit more. Apart from the traditional grammatical topics, there is a chapter on “The Greek Language & Textual Criticism,” “Sentence Diagramming & Discourse Analysis, “Word Studies,” and “Continuing with Greek.” Each chapter begins with a section called “Going Deeper” which shows why it’s worth it to learn the material found in the chapter. The chapters include not only examples but also exercises and assigned vocabulary followed by a reading with pertinent grammatical notes. I love Wallace’s Greek Grammar Beyond the Basics, but Going Deeper is so much more enjoyable to read.

Here are the differences I noticed between the two editions. The height and width are the same, but the revised edition is noticeably slimmer. The page count has increased but the new paper is thinner. Note that the pagination does now differ. There are some minor updates such as the inclusion of new resources such as BrillDAG, The Greek New Testament, Produced at Tyndale House, and Best Bible Books (409, 503, 506). There’s eensy-weensy tiny stuff here and there like a corrected typo found on p. 234 in the original edition, πέμψαντα is now printed in bold on p. 325, the footnotes on the chart of improper prepositions are now enclosed in a box (414). I noticed minor changes here and there to the English translations of Greek examples. Instead of Jesus “giving orders” in Matt 11:1, He’s now “giving instructions.” A bigger change affects pronouns referring to deity. They were capitalized in the original; this is no longer the case in the revised. But perhaps the biggest change of substance deals with the examples. Out of the original five examples of substantival participles, one remains alongside four new ones. My first thought was that perhaps they had used the same examples as Wallace, only two overlapped (John 3:16 and 1 Tim 6:15; see Wallace, 620–621). The situation is similar for the infinitive used in indirect discourse. One of the original five was retained. Two of the originals overlapped with Wallace (Mark 12:18 and Jas 2:14; see Wallace 604). All in all, these changes are minor.

To me, this is the best choice on the market for Greek students. It’s enjoyable to read. It’s streamlined, up-to-date, and comes with a bunch of Ancillary Resources freely available online. Everyone who is going to continue progressing in Greek should have Wallace’s Greek Grammar Beyond the Basics, but this is perfect for use in a Greek exegesis course.

When deciding which edition to purchase, students should buy whatever their syllabus stipulates. But if you already own the 2016 edition, and you’re using it for your own personal reference, there’s no need to purchase the revised edition unless you’re looking to save a few millimetres of real estate on that bookshelf. Pastors would do well to read this book as a refresher and also use it as a reference in their exegesis.

Special thanks to B&H Academic for providing me with a review copy of this book. This did not influence my thoughts regarding this work.