Book Review: The Greek of the Pentateuch 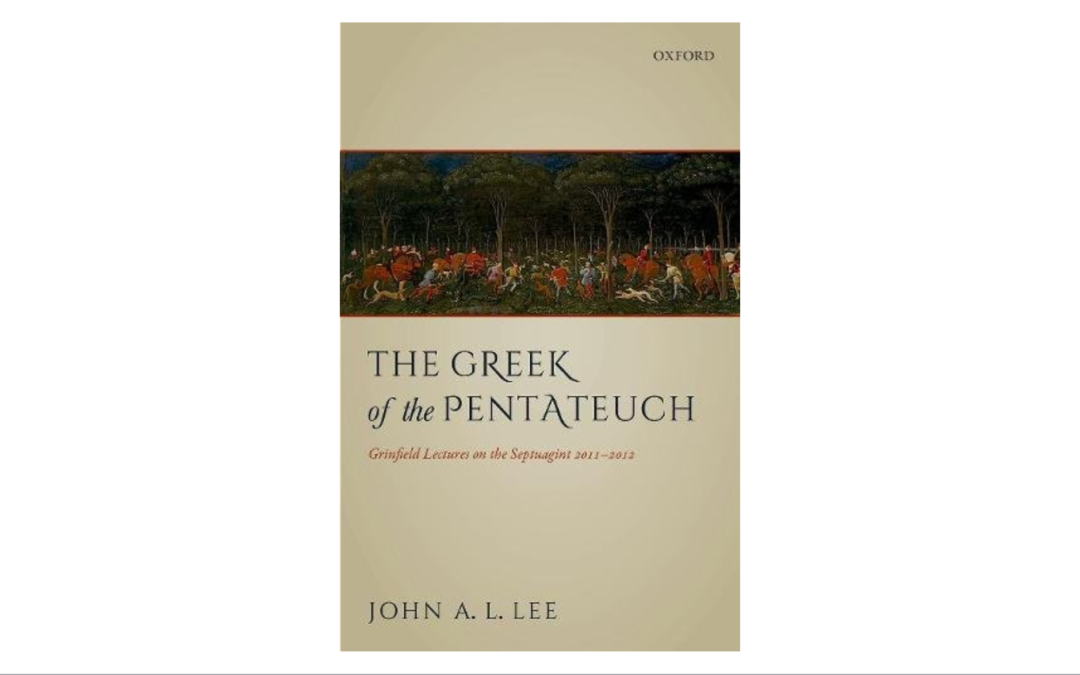 The Septuagint reminds me of the Zarephath widow’s jar of flour and jug of oil. It’s an inexhaustible source of benefit to its owner. And it would be wrong to restrict its study and use to the academy. Pastors can and should use the Septuagint in their exegesis. And there’s a book by John A. L. Lee called The Greek of the Pentateuch that will open your eyes and enrich your understanding of the Greek found in the first five books of the Septuagint. This book is the published result of six lectures Lee delivered in 2011 and 2012 for the Grinfield Lectures on the Septuagint in Oxford. Here’s what he covers in each chapter.

The only way to know anything about a language is through evidence—vocabulary and syntax found in papyri, inscriptions, literary Greek, and the Septuagint itself among other sources. When we compare the Greek of the Pentateuch with the evidence, it becomes abundantly clear that translators knew how to speak genuine, bonafide Greek.

This chapter was one of my favourites. It’s the reminder we need that engaging in lexical semantics requires more than a lexicon. Online search tools have unlocked unprecedented access to the wealth of Greek words in their ancient habitat. At the same time, Lee acknowledges the demand for the reader to be able to read unfamiliar texts. Lexical semantics is a rich field that too many pastors go about the wrong way.

The translators’ stylistic variation and preferences demonstrate they knew how to use Greek. (You’ll notice this conclusion shows up a lot.)

The translators were a product of a rigorous education system. They received advanced education making them extremely comfortable with Greek. And, it’s in this chapter, the reader encounters the inspiring tale of Zenon’s dog. This is my other favourite part of the entire book. Lee includes it to show what another text from this educational environment looks like. And while it is unclear whether the Pentateuch translators could attain this ideal, their syntax and vocabulary reveal an advanced education with a native-speaker familiarity with Greek.

The translators’ use of idiom demonstrates a native-speaker competence in the Greek language. They did stuff with pronouns, prepositions, particles, and other features their Hebrew Vorlage didn’t require to produce a translation wrought in the language of their time.

Stop, collaborate, and translate. Is this what the translators did? Without a doubt. And there weren’t 72 of them. There were probably five of them working concurrently. They each follow a similar translation style and they use the same cultic terminology (with possible reliance on a glossary to ensure uniformity).

This chapter analyzes how deeply the Greek of the Pentateuch was affected by interference from Hebrew. Lee’s conclusion? “The translation is a Greek text with a Hebraic flavour” (257). The translators were perfectly equipped to write a natural Greek translation that maintained some Hebrew stylings, resulting in a “new, ‘biblical’ Greek style” (258).

Lee reviews the fruit of his analysis covering the translators’ knowledge of Greek and translation method.

While a technical read, this book is highly readable. Lee builds his case in a logical and convincing manner. Greek and Hebrew texts come with English translations. Although, I did notice a French quotation that was left untranslated (222). Non-specialists like myself may be less interested in some chapters than others, but they all work together to build a strong argument in favour of Pentateuch translators with a close intimacy to Greek. Lee’s overall theme is helpful to understand in light of other literature on the Septuagint. The Pentateuch translators were adept at writing in Greek. Lee’s methods for proving this is instructive and fascinating. Overall, his work is inspiring and impressive.

Special thanks to Oxford University Press for providing me with a digital review copy of this book. This did not influence my thoughts regarding this work.